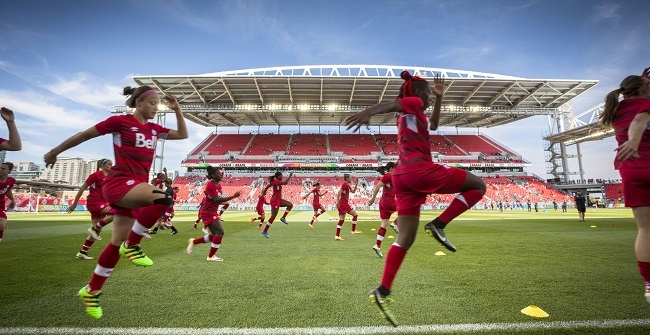 Before heading to France for two Friendlies

Canada’s Women’s National Team will assemble starting 1 July for a two-week training camp in Burnaby, before departing to France 13 July for final Olympic preparations. In France, Canada will play a closed-door friendly against China PR on 20 July and another friendly against France on 23 July, before departing for Brazil to begin the Rio 2016 Olympic tournament.
The final stage of Canada’s Olympic preparations follow a home series against Olympic hosts Brazil in Toronto and Ottawa. Canada split the two-game series, falling 2-0 in Toronto before rallying back in a decisive 1-0 win in Ottawa. Both matches set attendance records for national teams in the respective venues with a total of 52,172 fans and gave Canadian fans a taste of what Canada’s team will experience in Brazil during the Olympics – a tough fight, but one this team is eager to take on.
“We took away some key learnings from the games against Brazil, and I think the team really benefitted from those matches,” said Head Coach John Herdman. “Taking a loss in front of a home crowd is really tough, but we fought back in the second match in Ottawa and showed a gritty resilience. I think Canada’s fans can expect to see more of that grit as we face two top 5 teams in the early stages of the Olympics.”
Canada will be using this last home camp to focus on preparing to play Olympic group stage opponents Australia, Zimbabwe and Germany. Facing three very different teams in terms of style and experience in the group stage, the young Canadian side will have a tough battle ahead of them. Canada will face 5th ranked, Asian Champions Australia which it has played 15 times with a 5-3-7 record, logging three loses, two wins and two ties since 2000. Olympic new comers Zimbabwe pose uncertainty for Canada, as the two teams have never faced each other. The reigning European Champions Germany, thought to be the toughest of Canada’s group stage opponents, have come out on top in all of the 12 match ups between the two teams.
“We are headed into this tournament as underdogs,” said Herdman. “It’s a good feeling because the team know that they will have to really push new levels of individual and team performance to hit the podium. For many this will be their first Olympic experience but we will use the experience from our veterans to guide them through, this dynamic of infusing experience with youth can be a real positive for our team”