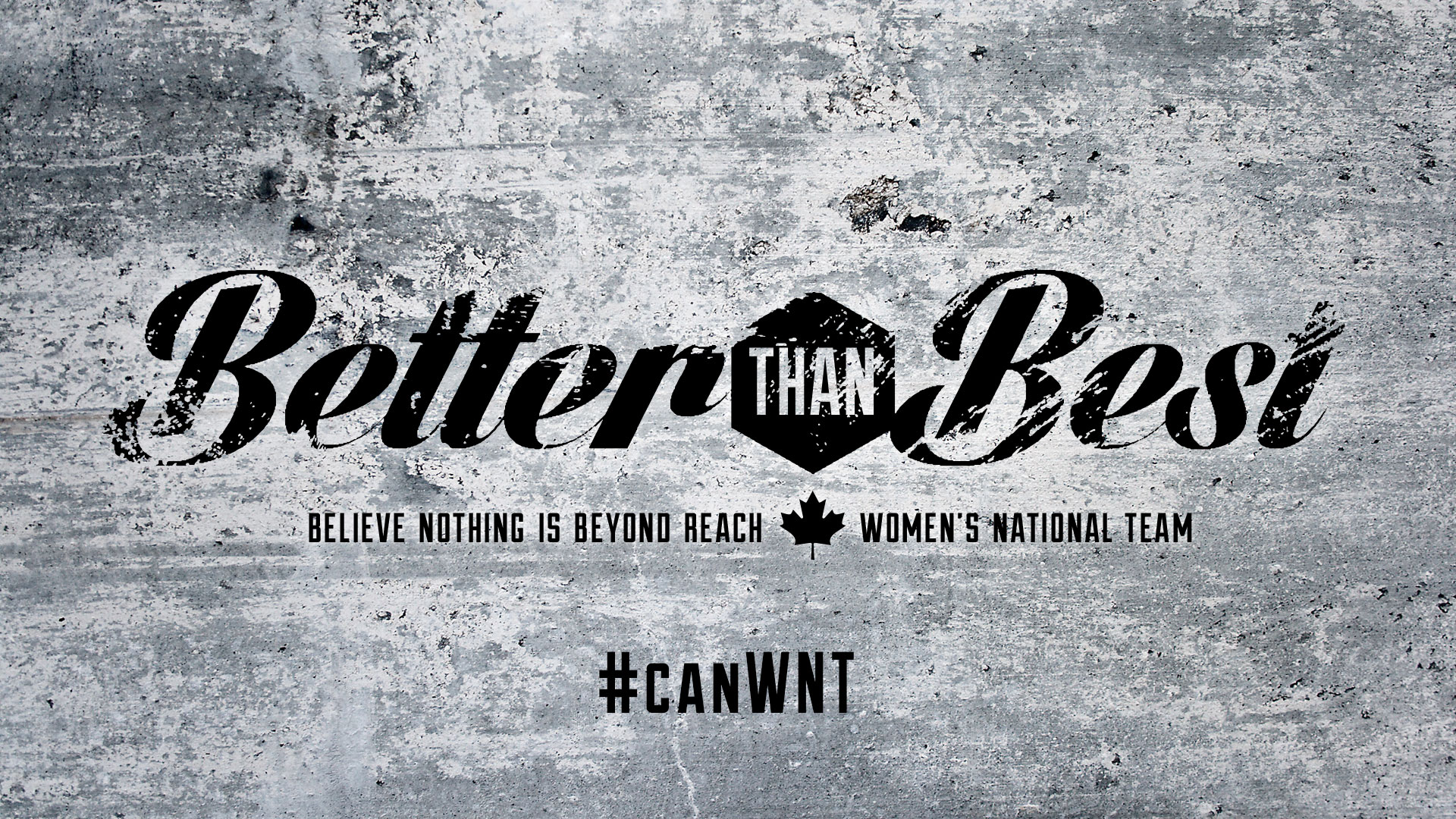 As Better than Best becomes the voice of Canada’s Women’s National Team as it progresses towards Canada 2015, look for promotional content, contests and more in months to come.

Following its inspiring performance at the London 2012 Olympic Games, Canada’s Women’s National Team has fully embraced the spotlight – and pressure – that comes with representing the pride and hopes of an entire country. Created to capture this dynamic, Canada Soccer’s newest initiative aims to echo the aspiration of the program while becoming a rallying cry for the team and its fans in the lead up to the FIFA Women’s World Cup Canada 2015TM and beyond. Today’s unveiling of the campaign slogan and introductory video will evolve to become the inspirational thread that will run through all promotional and interactive activities surrounding the Canadian women’s team.

Creation process
The Better than Best tagline is the result of a creative process that revolved around the team members and their desire to leave a legacy for future generations. Led by creative director Justin Kingsley, the team participated in a session where each member was asked about the challenges and opportunities the team faced, what made it unique and what did they want to be known for.

The result – Better than Best – is the summary of the philosophy, inspirations, goals and aspirations they expressed, individually and as a team.

What is Better than Best
Better than Best is a state of mind. It is an ultimate goal, one that applies for both person and program. Like the concept of perfection, Better than Best is simply an aim. It creates a spirit, an understanding, an unwritten contract.
When a young woman from our Canadian National Team puts on that red jersey, she understands its significance – for her, for her sisters/teammates and for her country. She knows that even when at her best, she can get better.

It’s a belief that no goal is too far, no team is unbeatable, no trophy is unattainable and nothing is beyond reach – when an entire program is committed to being Better than Best.

It also represents a step towards more, and is building towards the FIFA Women’s World Cup Canada 2015TM where Canada’s Women’s National Team members will aim to be Better than Best in their quest to a greater goal.

As Better than Best is first introduced by video, fans are encouraged to share Canada’s Women’s National Team’s Better than Best, help them tell their story. Fans can also share with us, via Twitter (#BetterThanBest, #canWNT, #GreaterGoal), Facebook and YouTube, what Better than Best means to them and what they do daily to aim to be Better than Best as they, themselves, reach for a greater goal.

As Better than Best becomes the voice of Canada’s Women’s National Team as it progresses towards Canada 2015, look for promotional content, contests and more in months to come.