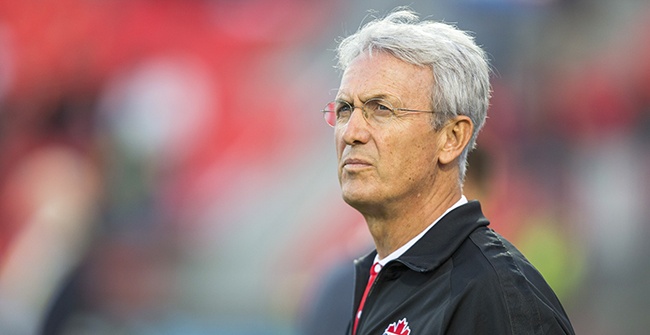 Canada’s Men’s National Team will face their stiffest test under Head Coach Benito Floro when they take on the third-ranked team in the world, Colombia, Tuesday 14 October at Red Bull Arena in Harrison, NJ, USA.

For that task, Floro has selected 23 players that will start with a camp in Cancun, MEX, before making the way up to the northeast of the United States for the final few days of camp in advance of the game.

“The match against Colombia will be very difficult for us, due to the quality of the opponent. At the same time, the game will be a very interesting test for us as we need to see our competitive level and our spirit against top teams,” said Floro, who guided Canada to a 3:1 victory over Jamaica last month. “The most important question for us is the attitude and at the same time to keep confidence in our capacity to create chances in the attack.”

In selecting his squad, Floro has continued selecting a veteran core of players along with a healthy mix of younger players who will be in the running for a U-23 squad selection.

It’s all part of the many projects that Canada will have to juggle in the coming few years with the CONCACAF Gold Cup coming up next year and FIFA World Cup™ Qualifiers still to come for the program.

“We have youth players with us and I want to show and teach these players how to play in the first team,” said Floro.

“My goal for this match against Colombia is to prepare the team and continue to improve how we press our opponents. We need to improve a lot in these situations.”

Canadian fans wishing to support the team can join the Voyageurs in the official Canadian supporters section at Red Bull Arena. Ticket information is available on the Voyageurs’ website.

The Canada-Colombia match will be broadcast live on Sportsnet World and streamed on Sportsnet.ca (kickoff at 21.15 ET / 18.15 PT). Fans can also follow the match live on Twitter @CanadaSoccerEN and visit canadasoccer.com for post-match report and players reactions.