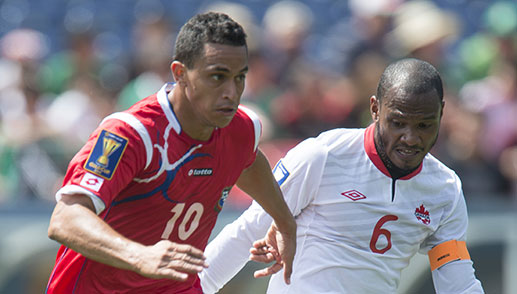 Canada’s Gold Cup run draws to a close in Denver

Canada’s Gold Cup run draws to a close in Denver

Canada exited the 2013 CONCACAF Gold Cup after a 0:0 draw with Panama

Canada threw everything they could at Panama, including pushing centre-back David Edgar and goalkeeper Milan Borjan forward in the dying stages, but the team couldn’t find a breakthrough as it exited the 2013 CONCACAF Gold Cup after a 0:0 draw with Panama in the final match of the group stage.

The Canadians had two penalty claims waved away and also failed to connect on a batch of set-piece opportunities as the team could not find the goal it desperately needed to bring itself back into contention to advance.

Panama had a number of chances of its own but missed wide on efforts from close range in the first half and Borjan made a diving save to deny Jairo Jimenez from range in the second period.

“There was no shortage of effort and endeavour from our players today,” said Interim Head Colin Miller after the game.

Canada’s exit from the tournament now ends Miller’s spell in charge of the Men’s National Team.

“This a results oriented business and ultimately we will be judged by our performance here – but I am proud to have given a good number of players their first caps during the last several months.

“We are bitterly disappointed to be going home at this stage but it is important to remember that this Gold Cup has been part of a long-term rebuilding process for us.”

Canada played throughout the Gold Cup with one of the youngest sides at the tournament – granting competitive debuts to seven players along the way.