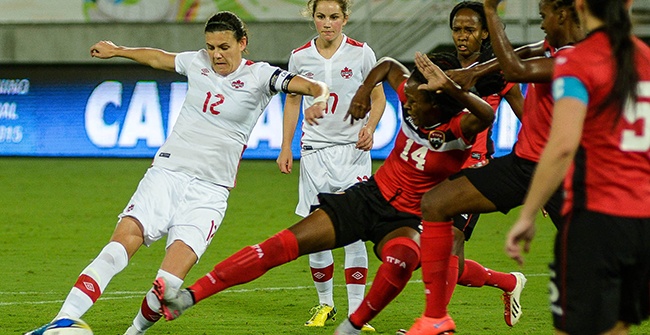 There was a lot of anticipation going into Sunday’s Women’s National team match against Trinidad and Tobago in Natal, but by the last whistle world records would be tied, Canadian records toppled, and first appearances had been made.

While Captain Christine Sinclair satisfied Canadians with the awaited goal that ties her at second with Mia Hamm on the world’s all-time goal scoring list for women’s soccer, goalkeeper Erin McLeod made Canadian soccer history by making her 111th appearance, edging her retired teammate Karina LeBlanc for the Canadian record. In firsts for the night, 18 year old Marie Levasseur earned her first appearance for the Women’s National Team.

Sinclair’s goal was what it should have been, a team effort accented by a thunderous strike from Canada’s top scorer, and now the world’s second highest. Marie Levasseur, making her first appearance, put a beautiful long pass onto the foot of Josée Bélanger, who out maneuvered a diving defender and put it on Sinclair’s boot in front of the net for a textbook Sinclair finish.

After the match, Head Coach John Herdman was clearly pleased for his star striker. “Sinc led by example, as always,” he said. “It wasn’t easy for her today, the Trinidad team packed the defence and made it tough to get behind them, but we had it clear in our mind that we would get goals today and I knew that Sinc would be on the score sheet. She found the room she needed.”

Canada’s 4:0 victory featured Nichelle Prince’s second of the tournament and put Matheson and Beckie on the score sheet, too. Sinclair tops the Canadian team in goals this tournament with three.
Herdman attributes the success to the work that has been going into bringing the team together, and the contributions of many players.

“The dynamic is definitely good, and the increased chemistry on the pitch will come with time,” he said. “What we’ve seen is some individual class from the younger players, and I think it has brought the best out in some of our senior players as well.”

Herdman has committed to building a world class pace around Sinclair, which adds more threat to the back line and can take some attention off her. For Sinclair, that means playing alongside players like Beckie and Prince, as well as newcomer Deanne Rose whose performance Herdman praised after the match.

“In a game like tonight, there just isn’t much space so it’s fantastic that Sinc found the space and got that goal, and she probably could have had a couple tonight, and she knows that. Sinclair has been getting good service this tournament and she’s starting to build relationships with Janine Beckie and Nichelle Prince, and tonight with Deanne Rose, who put a solid performance in.”

The combination of youth and seniority is what Herdman has been working towards as he builds his squad for the Road to Rio, which official starts with February’s CONCACAF Olympic qualification tournament.

What is certain, is that goalkeeper Erin McLeod will be a staple behind the pins for the foreseeable future.

“There’s a lot more in the bank for her, and I think that’s the excellent part,” he said. “She works so hard off the pitch and she’s a true elite performer in every single area whether mental or physical, she works at it. I think she’ll be around for a lot longer and you never know, she might even start to catch Sincy on top number of caps.”

In the end, it was Sinclair’s day to be celebrated, even if she doesn’t take much notice.
“She’s very clear in what she wants: to get results for this team and to keep pushing whatever threshold she can as a striker,” Herdman said. “It’s great that she achieved something today, but to be honest I don’t think she looks at things like that, she just wants to do well for our team and for our country.”

Canada’s next match is against home team Brazil on Wednesday 16 December 2015.