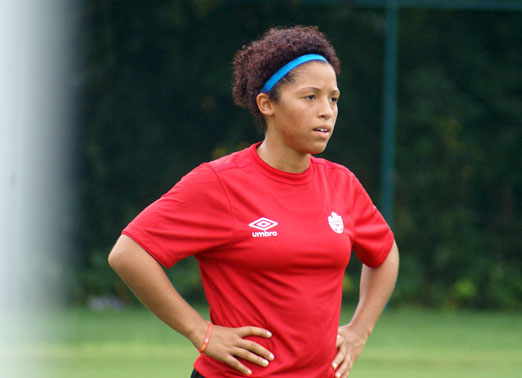 Tour in USA and Sweden produced 2:1 win over Brazil and 1:3 loss to Sweden.

Canada has wrapped up a two-week tour that included Women’s International Friendly matches in USA and Sweden. On back-to-back Saturdays on either side of the Atlantic Ocean, the Canadian team won 2:1 over Brazil in Foxboro, MA and then lost 1:3 to Sweden in Malmö, Sweden. The team’s overall record this year is eight wins and three losses in 11 international matches.

Christine Sinclair scored both goals in the victory over Brazil while Sophie Schmidt scored the lone goal in the loss to Sweden. Sinclair against Brazil and Desiree Scott against Sweden earned player-of-the-match honours. Over the course of the two matches, Canadian head coach John Herdman featured 21 different players.

Coach Herdman said that while it was a step forward against Brazil, it was a step “sideways” against Sweden. After the win against Brazil, coach Herdman inserted new players and a new formation against Sweden. While the second match produced some good periods of play, the result went the wrong way in favour of the host. Down 0-3, Canada did finish strong and did find the back of the net in the 87th minute.

“We have to start grinding the results out,” said Herdman. “Every game we play from now to the Olympics, we have to be more resolute.”

Canada, Brazil and Sweden are all preparing for the London 2012 Women’s Olympic Football Tournament, which runs 25 July to 9 August.