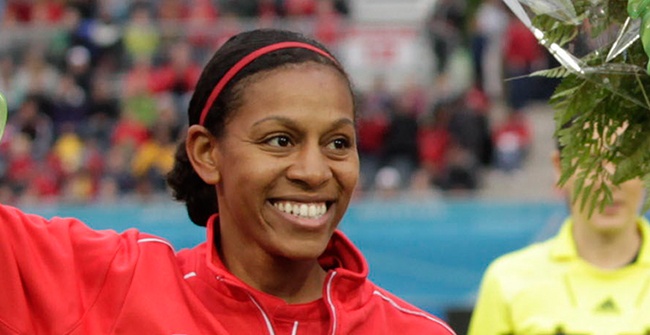 With 114 appearances, six international goals and an unforgettable Olympic Bronze Medal over a decade on Canada’s Women’s National Team

With 114 appearances, six international goals and an unforgettable Olympic Bronze Medal over a decade on Canada’s Women’s National Team, defender Candace Chapman has decided to call it a career.

“It has been an emotional journey to step away from playing the game I love and being around my teammates, past and present, who all have a special place in my heart. There are many amazing memories that I will forever cherish,” said Chapman.

Chapman, or “Chappie,” was born in Port-of-Spain, TRI and moved to Ajax, ON, at six years old and started playing for Ajax United at age seven. She made her debut at the senior level on 1 March 2002 in the Algarve Cup against Scotland.

She was a member of the Canadian team that made it all the way to the final at the inaugural FIFA Women’s U-19 World Cup in 1999 where Canadian women’s football initially grabbed the nation’s attention.

But perhaps what sticks to the mind most is when Chapman shook off a calf injury in coming on in the 84th minute against France and was on the field when Canada scored a late goal to win that historic bronze medal at the 2012 Olympic Games in London.

“Throughout that whole Olympic campaign, she was an absolute key player right up until her injury at the Olympics, which was one of the saddest things at that time,” said Canada WNT Head Coach John Herdman. “For her to come back in the France game and come on the pitch and see the game out for our girls and add what she added to pick up the bronze medal, it was almost the story being concluded at that point. It was just a great journey.”

Herdman was effusive in praising Chapman’s character on and off the field.

“She has a really pure heart and a great character. Off the pitch, she was quiet, unassuming, but had this presence about her that when she came onto the pitch, she completely changed,” said Herdman. “She became this really strong, physical centre back that could actually play. She had the ability to make the passes that midfield players do.”

“Hearing that final whistle blow in the Bronze medal match and knowing it might be the last time I represent Canada is among those memorable moments,” said Chapman. “I feel very lucky to continue to be part of Canada Soccer as a youth coach and give back to the game that has given me so much.”

Chapman is a graduate of the University of Notre Dame.

She wanted to thank her previous coaches who helped her along the way to international football. She thanks her friends and family who have supported her and for all the fans that have supported the team.

“We have a remarkable opportunity hosting the WWC and I know the team will give all they have to make Canada proud. “

Chapman’s retirement will be commemorated before Canada’s Women’s National Team’s match against England on Friday evening, as well as Melanie Booth, who had officially announced hers last November.