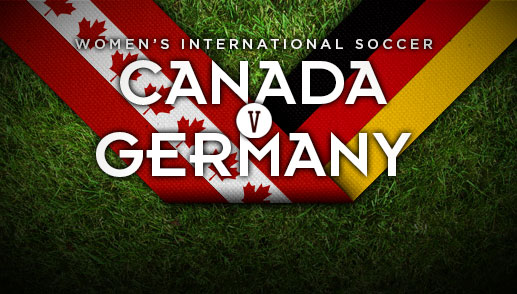 Canada’s Women’s National Team will host world no. 2 Germany on Wednesday, 18 June 2014 at BC Place

Canada’s Women’s National Team will host world no. 2 Germany on Wednesday, 18 June 2014 at BC Place and tickets for this high profile International Friendly, presented by Garnier Ombrelle, go on public sale today.
This summer’s face off between two of the top Women’s footballing nations is sure to be one soccer fans will want to be present for as the last two matches between Canada and Germany were close encounters decided by one goal differential.

Tickets for the Canada-Germany match on 18 June (kickoff 19.00 local time) at BC Place in Vancouver are on sale via Ticketmaster this Friday starting at 10.00 local time / 13.00 ET .

In a continued effort to provide an accessible and affordable family experience for the Canadian soccer community and its supporters, tickets are available starting at $20 (plus applicable fees).

Families can take advantage of the Family Pack offer and get four tickets for the price of three (tickets in the pink sections only).

Since Vancouver will also play host to reigning FIFA Women’s World Cup Champions Japan in October, a two-match pack featuring both Canada’s Women’s National Team 2014 matches at BC Place and offering a 10% discount is also going on sale starting at $36 (plus applicable fees). Two-match packs are available for single and group tickets.

Additionally, purchasers of tickets for Canada’s Women’s National Team matches in Vancouver will be offered a special opportunity to opt-in to a Priority Access list to purchase venue packs for the FIFA Women’s World Cup Canada 2015™ matches at BC Place when the packs go on sale.

All ticket information is detailed on the event page at canadasoccer.com/canWNTvGER.

Individual tickets for the 28 October 2014 Canada-Japan clash will go on sale around the June Canada-Germany match date.

Vancouver is one of the six Official Host Cities for the FIFA Women’s World Cup Canada 2015TM and will have the privilege of hosting the world’s largest women’s football tournament championship match.