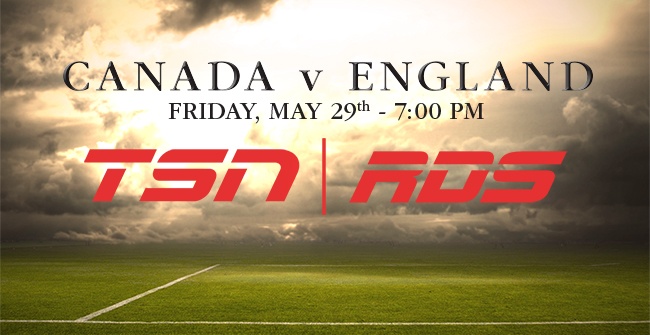 Canada WNT v England on 29 May broadcast on TSN

Canada WNT v England on 29 May broadcast on TSN

Canada Soccer is pleased to confirm that the 29 May International Friendly match between Canada’s Women’s National Team and world ranked number six England, taking place at Tim Hortons Field in Hamilton, ON, will be broadcast live on TSN starting at 19.00 ET / 16.00 PT. The match, presented by Canadian Tire, is Canada’s last official activity before the start of the FIFA Women’s World Cup Canada 2015™.

Fans will be able to follow the match live on TSN with play-by-play commentator Luke Wileman and analyst Clare Rustad, while Kara Lang will be reporting from the sidelines. In addition, TSN subscribers will have access to live streaming and on-demand viewing of the match through TSN GO.

Additionally, the Canada-England match will be available over the air on TSN Radio (Montreal, Toronto, Winnipeg, Vancouver & CKOC in Hamilton) as well as listen live on TSN.ca. The match will also be available in French on RDS.

“Canada Soccer is thrilled to broadcast this Canada-England match on TSN, the official host broadcaster of this summer’s FIFA Women’s World Cup Canada 2015™,” said Peter Montopoli, Canada Soccer General Secretary. “It represents a natural extension of the fantastic work TSN has been doing in promoting the competition and Canada’s Women’s National Team, and offers us the best platform to spread excitement going into June. We hope Canadians from coast to coast tune in and proudly support the team on their journey!”

Canada kicks off its quest at the FIFA Women’s World Cup Canada 2015™ on 6 June when it will face China PR at Edmonton’s Commonwealth Stadium. The squad will then face New Zealand (Edmonton, 11 June) and the Netherlands (Montreal, 15 June) with hopes to continue in the competition, which will conclude with the championship match in Vancouver on 5 July. Visit fifa.com/canada2015 for all the details on the competition.

Fans can follow Canada’s Women’s National Team via Twitter @CanadaSoccerEN using #canWNT and share their support by tagging messages and pictures with #CanadaRED. Canada Soccer also invites fans across the country to share their viewing parties and other activities in support of the team on Canada Soccer’s Facebook page and help build the country’s best community calendar. For more information on Canada’s National Teams and tickets to the Canada-England 29 May match, visit canadasoccer.com.