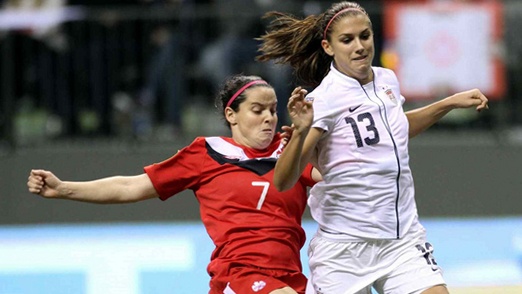 Canada WNT to take on USA in Olympic tune up

Canada WNT to take on USA in Olympic tune up

Canada will square off against USA in a Women’s International Friendly on 30 June 2012 at Rio Tinto Stadium in Sandy, UT. The international match will help both teams prepare for the upcoming London 2012 Women’s Olympic Football Tournament, which kicks off one month later.

“The game provides us with a great opportunity to play the number one team in the world so close to London 2012,” said Canadian head coach John Herdman. “If you want to win a medal you’ve got to be ready to beat USA. This will be a real test for us.”

The 30 June match will kick off at 12.00 local (14.00 ET / 11.00 PT). It will mark the second meeting this year between the two North American sides, following the CONCACAF Women’s Olympic Qualifying final at a sold-out BC Place in Vancouver earlier this year. Both Canada and USA qualified as the CONCACAF representatives for London 2012.

The match in Utah will come exactly one month following the Canada’s home Olympic send-off on home soil, a 30 May Women’s International Friendly against China PR at Stade Moncton 2010 Stadium in Moncton, NB. Full ticket details for that match in Moncton are available via CanadaSoccer.com.

The Canada-USA rivalry dates back to 1986, with the two sides facing each other more often than any other opponents. USA is both the reigning Olympic champion and recent FIFA Women’s World Cup silver medal winner. Just last year, the two sides played two matches against each other on American soil, with the first match a 1:1 draw and the follow up a 3:0 result in USA’s favour.

So far in 2012, Canada has posted an international record of eight wins and three losses. Canada finished second at both the CONCACAF Women’s Olympic Qualifying tournament and Cyprus Women’s Cup.