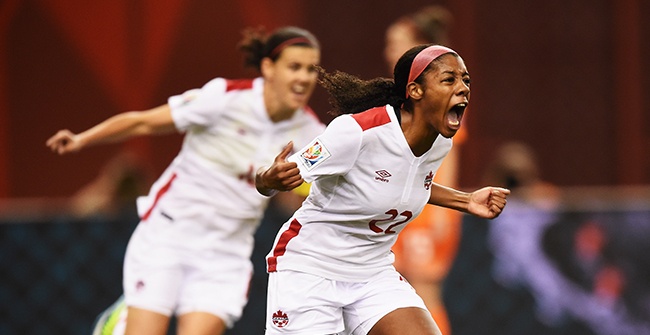 Canada will face Netherlands in a 2016 Women’s International Friendly match on 10 April in Eindhoven, Netherlands. The international soccer match will serve as part of Canada’s preparations for the upcoming Rio 2016 Women’s Olympic Football Tournament.

This year marks Canada Soccer’s third-consecutive participation at the Olympic Games. Following a first-place finish at the recent Algarve Cup, Canada’s preparatory schedule features the away friendly against Netherlands and a pair of home send-off matches against Brazil. Canada Soccer’s Road to Rio matches against Brazil are 4 June in Toronto and 7 June in Ottawa (tickets on sale 22 March via canadasoccer.com/tickets).

The Canada-Netherlands match will be played at the Jan Louwers Stadion in Eindhoven with a 16.00 local kick off. This marks the two nations first encounter since an exciting 1:1 draw in the group phase of last year’s FIFA Women’s World Cup Canada 2015.

Both Canada and Netherlands were among the best nations in the world in 2016, with Canada in sixth place and Netherlands in 13th place at the FIFA Women’s World Cup Canada 2015. For the Rio 2016 Olympic Games, Canada have qualified through a second-place finish at the CONCACAF Women’s Olympic Qualifying Tournament while Netherlands were eliminated in a UEFA playoff. Looking ahead, Netherlands are hosts of the upcoming UEFA Women’s EURO 2017.

ROAD TO RIO SERIES IN TORONTO & OTTAWA
Tickets to Canada Soccer’s Road to Rio home matches will go on sale on Tuesday 22 March at 10.00 ET / 7.00 PT. Fans wishing to receive access to a special presale window can do so by subscribing to Canada Soccer’s newsletter at canadasoccer.com/subscription.php?act=subscribe.

In an effort to ensure that the match is accessible to all fans, groups of 10 or more are eligible for group discounts of up to 30%. Group ticket requests are now being accepted and are processed on a first come, first served basis. To submit a group order, simple complete the group order form indicating the price point and quantity of tickets via the group order form at canadasoccer.com/tickets. Designated Canadian supporter sections will be established in both venues. Complete ticketing information is available at canadasoccer.com/tickets.