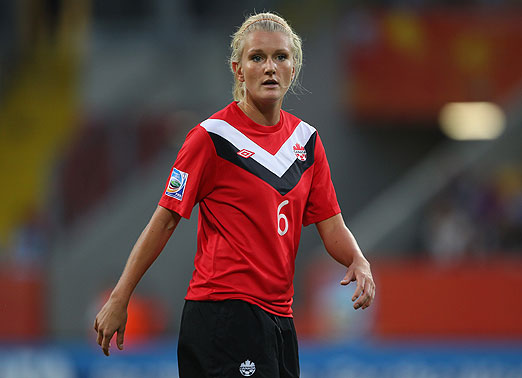 BC Place home to all 15 CONCACAF Women’s Olympic Qualifying matches.

Canada will face Haiti in its opening match of the 2012 CONCACAF Women’s Olympic Qualifying tournament this Thursday 19 January. The match officially kicks off Canada’s 2012 campaign, with high hopes off adding the London 2012 Olympic fixtures to the Canadian calendar year.

Canada will play three to five matches at the 2012 CONCACAF Women’s Olympic Qualifying tournament from 19-29 January 2012, with all matches to be played at BC Place in Vancouver, BC. Canada will have three group matches to prepare (and finish first or second in its group) before playing in the all-important semi-final match on 27 January. Winners of the two semi-final matches will qualify for the London 2012 Olympics.

“You can’t look past some of these teams (like Haiti) because you want to finish first in your group,” said captain Christine Sinclair following the Canadian team’s final on-field training session on 18 January at BC Place.

The Canada-Haiti match kicks off at 19.30 local (22.30 ET / 19.30 PT), which is shortly after the conclusion of the Costa Rica-Cuba match (20.00 ET / 17.00 PT). Fans can watch both matches live via Sportsnet. In-match updates will be provided via Canada Soccer’s Twitter page at twitter.com/canadasoccer. Post match reports, video and photos will be provided via CanadaSoccer.com, youtube.com/CanadaSoccerTV and flickr.com/CanadaSoccer.

Canada is coming off a mixed season in which it set a national record with 14 wins. The team finished first at both the Cyprus Women’s Cup and Pan American Games, but disappointingly finished last at the FIFA Women’s World Cup Germany 2011. Fifteen players from that FIFA Women’s World Cup team are in Vancouver seeking redemption at the Olympic qualifiers.

After Haiti, Canada faces Cuba on 21 January and Costa Rica on 23 January. A semi-final match would be played against either Dominican Republic, Guatemala, Mexico or USA.