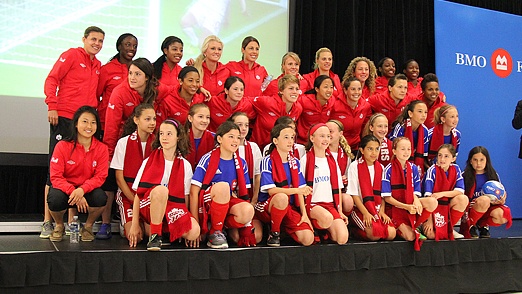 Canada WNT set for showdown with USA at BMO Field

Canada WNT set for showdown with USA at BMO Field

After months of anticipation – the wait is nearly over.

Canada WNT will take to the pitch in front of a sold-out crowd at BMO Field on Sunday 2 June (16.30 local kick-off) when the team takes on USA for the first time since the dramatic Olympic semi-final between the two teams at London 2012.

The Canada-USA match will be broadcast live in Canada on all four regional Sportsnet networks (16.30 ET / 13.30 PT). Fans will also be able to follow live coverage on Twitter: @CanadaSoccerEN. Complete pre and post-match video coverage, including highlights, will be available on CanadaSoccerTV.

After a busy week of engagement with the team’s supporters in Toronto – Head Coach John Herdman believes that Sunday’s match against the Americans will prove to be a new experience for his team – as it adjusts to the increased attention and support from the Canadian public.

“I think it’s important to set the context around this match,” said Herdman.

“For us, it is very much a learning experience as for many of the girls they are dealing with something approaching rock-star status in the build-up to this game.

“We are not necessarily used to that.”

The team’s schedule preparation schedule in Toronto featured a number of opportunities for the team to interact with its supporters – and Herdman indicated that the team has been pleasantly surprised by the magnitude of the support it has received.

“We arrived at training and were greeted by hundreds of screaming kids – and that hasn’t always been the reality for this team,” said Herdman.

“I think it has brought some good energy into the team.”

Yet for all the increased attention and anticipation – the fact remains that Canada is squaring off against an American team that are currently ranked number on in the world. And Canada have not beaten USA since a 3:0 victory at the Alagarve Cup in 2001.

“It’s no secret that we are playing the best team in the world – yet people still expect us to try and get a result on home soil,” said Herdman.

“We know that it is going to take a collective personal best performance if we are going to get a result from this game.

“We have done everything in our power to help us reach that goal.”

But beyond simply focusing on delivering a performance in Sunday’s match, coach Herdman is maintaining his long-term narrative and focus on Canada 2015 and the 2016 Olympics.

The Canadian coach believes that this weekend’s high-profile friendly against USA will serve the team well as its continues to prepare itself for the rigours of hosting a FIFA Women’s World Cup and defending an Olympic medal.

“This is the type of environment we need to get used to leading into the FIFA Women’s World Cup Canada 2015 and the Olympics in Rio in 2016,” said Herdman.

“We know we have to try new things to beat a team like USA and this is another step in our evolving journey as a team.”NOTES: