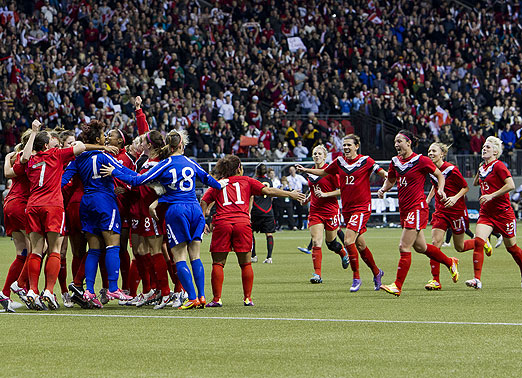 Call it the London 2012 Project: head coach John Herdman was in downtown Toronto on Thursday 2 February to discuss the team’s preparations for the 2012 Women’s Olympic Football Tournament. Herdman arrived in Toronto after a succesful qualification for London 2012 with a second-place finish at the CONCACAF Women’s Olympic Qualifying tournament in Vancouver. Herdman was in Toronto for the Canadian Soccer Association’s 2012 Umbro Kit Launch.

Canada’s next international matches are late February and early March as part of the 2012 Cyprus Women’s Cup in Larnaka, Paralimni and Nicosia. The team will wear the new Umbro kit for the first time on 28 February against Scotland. Canada’s top National Teams are wearing the Umbro kit on back-to-back days in late February, with the men’s “A” team following suit on 29 February in an away Men’s International Friendly against Armenia in Limassol, Cyprus.

“After a great start to the year at CONCACAF Women’s Olympic Qualifying in Vancouver, we are looking forward to keeping the momentum going throughout the rest of the Canadian Soccer Association’s centennial year,” said John Herdman, Head Coach of Canada’s Women’s National Team. “Our focus will be on preparing for London 2012 and ensuring that the program continues to develop positively ahead of 2015 FIFA Women’s World Cup Canada™.”

Canada posted four wins and one loss at the 2012 CONCACAF Women’s Olympic Qualifying tournament at BC Place in Vancouver. Before falling to reigning Olympic champion USA in the CONCACAF final, Canada earned its berth in the 2012 Women’s Olympic Football Tournament with a Friday 27 January win over Mexico. Canada won its Big Friday match 3:1, with goals from Christine Sinclair (two) and Melissa Tancredi.

At the 2012 Cyprus Women’s Cup, Canada plays Scotland on 28 February, Italy on 1 March and Netherlands on 4 March. The tournament classification match date is 6 March, with the top teams from Group A facing the top teams from Group B. In all, 12 teams are partcipating in the annual tournament (three groups of four teams). Last year, Canada won the Cyprus Women’s Cup with a 2:1 a.e.t. victory over Netherlands. Emily Zurrer scored the extra time winner with a header off a Diana Matheson corner kick.