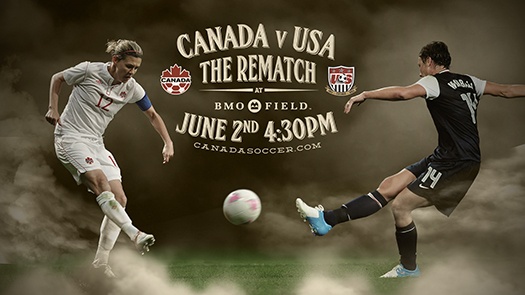 Canada WNT to take on Americans on 2 June. Tickets to go on sale 22 March.

The match against the Americans will be the first time the two teams have clashed since a dramatic semi-final at the Women’s Olympic Football tournament at the London 2012 Olympics.

In a drama-filled affair on 7 August, 2012, captain Christine Sinclair handed Canada the lead on three separate occasions but the Americans ultimately prevailed with a 123rd-minute winner in extra time.

Canada rebounded from the devastating loss against USA to claim the country’s first-ever Olympic medal in Women’s football and Canada’s first summer Olympics medal by a traditional team sport since 1936 – but the chance to square-off with the Americans once more conjures up ‘special’ emotions for Head Coach John Herdman and the Canadian players.

“This will be the biggest game of the year for many of our players. It’s our biggest game since the Oympics,” said Herdman.

“It’s a real coup for us to have USA coming to play on Canadian soil. It will be a special occasion.”

Peter Montopoli, General Secretary of the Canadian Soccer Association, pointed out the importance of the match for the sport in Canada.

“We are excited to give Canadian supporters the chance to express their support and celebrate this Women’s Team that captured the nation’s admiration during the Summer Olympic Games,” said Montopoli.

“It is even more special to be able to do it against our long-time rival the USA. We know these matches are always riveting, and it represents an opportunity for Canada to continue this momentum for the sport as we move closer to hosting the FIFA Women’s World Cup Canada 2015™.“

Tickets to the Canada-USA match on June 2nd will go on sale via Ticketmaster on March 22nd. Special rates for groups of ten or more will also be available. Those interested in receiving more details on tickets for this match, as well as on-sale reminders, are invited to sign up on canadasoccer.com.

For those unable to make it to BMO Field on June 2nd, the match will also be broadcast live nationally on all four regional Sportsnet channels.