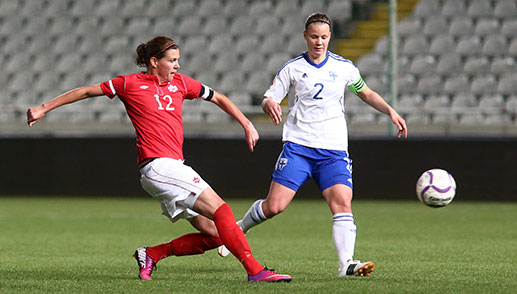 Canada’s Women’s National Team has brought 20-players to the Mediterranean where they’ll aim to reclaim the Cyprus Cup, a tournament they have won three times but haven’t won since 2011.

There are only a few changes from the Canadian squad that went to Texas last month to play in the international friendly against the United States.

Defender Robyn Gayle is back in the squad, as are defender Rachel Quon and forward Nkem Ezurike, who will be looking to make their first appearances for Canada at the senior level.

“(Ezurike) had a very good college season for Michigan,” said Head Coach John Herdman. “We had her in our program last year so she did some camps with (U-20 Head Coach) Andrew Olivieri so Andrew’s been keeping an eye on her. We got her in January for a two-week trial and she did well.”

The group stage gets underway as Canada, which will be based in Larnaca, CYP, takes on Finland on Wednesday 5 March. Up next will be a game against Italy at the GSZ Stadium in Larnaca on Friday 7 March with the group stage concluding on Monday 10 March at the GSP Stadium in Nicosia against England.

England beat Canada 0:1 in the final last year and France were winners in 2012 with a 2:0 win over Canada.

“We’ve been to pretty much all the finals since I’ve been here and just haven’t been able to cross that line,” said Herdman. “We desperately want to do well in the tournament. There’s something about getting used to these tournaments and being effective in them so at some point you’ve got to win it.”

*Sesselmann is not available for the tournament for cause of injury