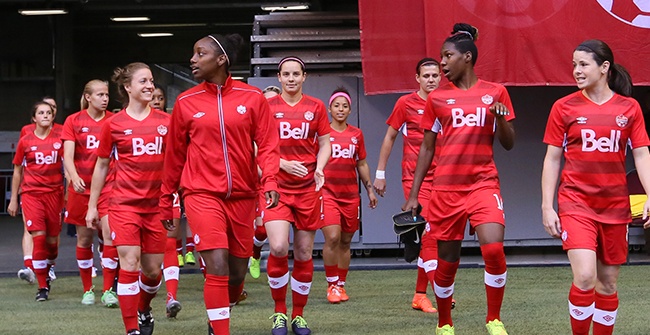 After recently arriving back on the west coast for the start of their latest round in the Centralized Development Program (CDP), Canada’s Women’s National Team get two early tests against the world’s best team.

Head Coach John Herdman has announced his roster of 20-players that will take on Japan in back-to-back Women’s International Friendlies on Saturday 25 October (kickoff 14.00 local time) at Commonwealth Stadium in Edmonton and then Tuesday 28 October (19.00 local time) in Vancouver at BC Place.

“We’ve brought players that have that experience but also have that blend of youth,” said Herdman, who has brought in players who haven’t been in camp but in NCAA college environments.

“I think that it’s an important feature as we look for the right group that will take us through the FIFA Women’s World Cup™ in 2015.”

These games against Japan mark Canada’s continued preparations as they get set to host the world next summer for the FIFA Women’s World Cup Canada 2015™. Canada’s already hosted USA and Germany this year.

But in Japan, Canada is aiming high as Japan are the reigning FIFA Women’s World Cup™ Champions and are proving to be one of the best programs in turning out world class women’s soccer players year after year.

Just over seven months to go until the competition, these matches will serve as a good yardstick for Canada as they look to close the gap between the top programs in the world. But more than that, as CDP is just getting underway, it’s a great time to get some competitive action in.

“We just came into residency and the players have been on a break from their professional environments, so I think the main thing for us is that we’re able to be really competitive in these matches and that’s what we want to make sure,” said Herdman. “The players I’ve selected are close to the fitness levels that I’m looking for in internationals.”

These two teams last met when they played their respective opening games at the 2012 Olympics in London. Melissa Tancredi scored for Canada but it wasn’t enough as Japan came away as 2:1 winners. Japan is one of the 15 nations already qualified for the FIFA Women’s World Cup Canada 2015™, finishing on top of the table in AFC Qualifiers. Tickets are still available at canadasoccer.com.