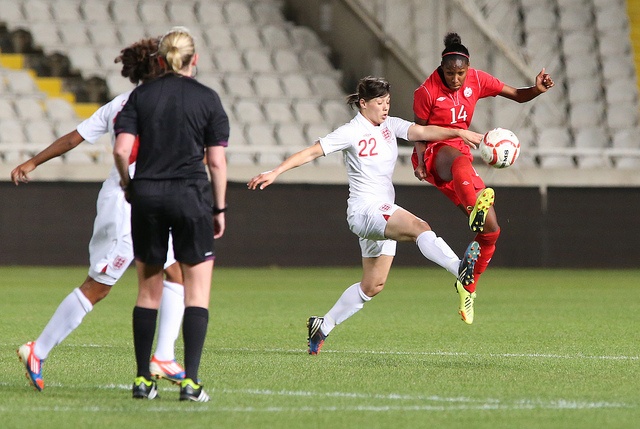 The last time Canada’s Women’s National Team faced Finland it was just over a year ago at the 2013 edition of the Cyprus Cup tournament. On that occasion, Canada went down early but fought back through Jonelle Filigno and Christine Sinclair to record a 2:1 victory.

The last time Canada’s Women’s National Team faced Finland it was just over a year ago at the 2013 edition of the Cyprus Cup tournament. On that occasion, Canada went down early but fought back through Jonelle Filigno and Christine Sinclair to record a 2:1 victory.

In this year’s edition of the tournament, Filigno hasn’t been able to make the trip and Canada will likely have to make do without key defender Lauren Sesselmann who went down with a knee injury that is getting examined in back in North America.

Simply put, Sesselmann out is a huge loss for Canada.

“That’s my only natural left foot on the whole team, believe it or not. We do lose a lot with Lauren,” said Head Coach John Herdman. “She’s versatile and she genuinely does give you that natural left foot that plays quite instinctively. We lose a little bit of balance but we’re able bring in Emily Zurrer, Kadeisha Buchanan, and it just means more players get more game time.”

The two teams trained on fields just a few hundred metres apart on Tuesday in Larnaca, CYP. Finland knows they’ll be getting a team that wants to put on their best performance when the world pays a visit in 2015 and Canada knows they’ll be playing a team fighting hard just to reach the FIFA Women’s World Cup Canada 2015™.

Finland currently sits in second place in UEFA Qualifying Group 7 and are three points back of France. In addition, Finland is coming in unbeaten in five games.

“They’re coming into this confident and ready to play their style and they’re a very aggressive, forward thinking, counter-attacking, and direct team,” said Herdman. “That’s not being disrespectful to them. They are so organized in their strategy that we really have to be on our toes (on Wednesday). If we make any little mistakes around the back, this team punishes you.”

Canada plays Finland on Wednesday 5 March at 14.30 local time (7.30 ET / 4.30 PT). Canada follows up their opener with a game against Italy on Friday before concluding group stage play against England on Monday 10 March.