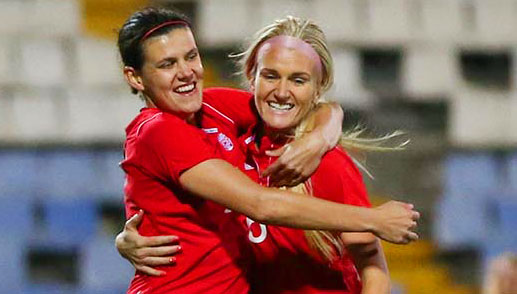 They got some bumps and bruises to show for it but Canada’s Women’s National Team is just one point away from yet another Cyprus Cup final.

They were expecting plenty of physical play from Italy and the Italians didn’t disappoint seeing one player sent off for two yellow cards and another caution given out but Canada hit Italy where it hurts, scoring the game’s first three goals in a 3:1 win.

“That’s one of the things we know about the Italian team,” said Diana Matheson, who scored and set up Adriana Leon’s goal in the first half. “There are a few teams out there that you know it’s not just going to be physical, it’s going to be chippy and it’s one of those teams and it was definitely like that today.”

Midfielder Sophie Schmidt appeared to take an elbow and had to come out with a gash on her cheek but she was in good spirits after the game while sporting a new bandage.

Christine Sinclair also was rather unceremoniously bundled over by Elisa Bartoli, who picked up her first of two yellow cards on the night. The second came late in the game after Diana Matheson had already won a free kick and Bartoli just plowed into Matheson, who had just gotten back onto her feet.

“Sophie Schmidt’s walked off with a bit of an elbow in the face and I think in the last 10 minutes, the players were just hoping for the referee to blow the whistle so that they could actually come off with their legs intact,” said Head Coach John Herdman, who coached his 50th game for Canada on Friday. “It did get a bit messy but credit to the girls, they didn’t really get involved in that but they matched things physically. I like to think we kept it above board for as long as she could.”

Canada plays England on Monday at the GSP Stadium in Nicosia. A tie puts Canada into the final and will see England relegated to second in the group as Canada has more goals scored.