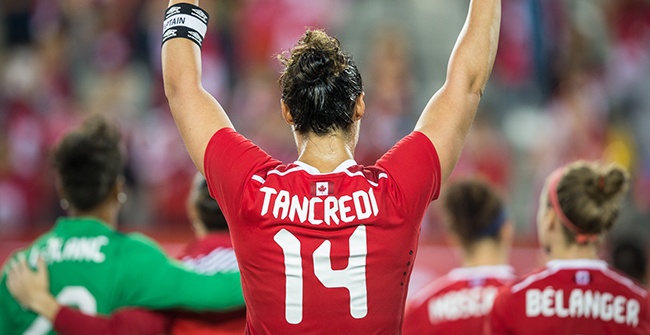 Canada looked as sharp and as composed as they ever have in a confident 1:0 win on Friday night at Tim Hortons Field

After a rousing sendoff in Hamilton, Canada’s Women’s National Team is ready for the FIFA Women’s World Cup Canada 2015.

Playing against England, a team they’d lost to four times previously, Canada looked as sharp and as composed as they ever have in a confident 1:0 win on Friday night at Tim Hortons Field in Hamilton, Ont.

Sophie Schmidt scored the game’s only goal, her 16th for Canada, as she’s proved that her increased scoring is not fluke and she looks to nicely complement the attack already provided by Christine Sinclair.

“It’s just a mindset that I need to get forward and put myself in positions where I can score goals because my teammates are going to get the ball there,” said Schmidt. “It’s just flipping that switch.”

For Canada, there are no more tune-ups, no more trial runs. The madness of a home World Cup is just around the corner and this is the kind of performance that they need to expect heading into the big tournament.

All the months in the gym, working on tactics, and watching video will finally come to fruition on 6 June at Commonwealth Stadium in Edmonton when Canada opens the tournament against China PR.

“I think they are (ready),” said Head Coach John Herdman. “They rose to that pressure knowing that they had to get a result for their country to get the momentum moving. I think the performance tells you they’re ready.”

The team has two days off in Toronto prior to one more training session in Ontario’s capital on Monday before making the trip to Edmonton on Tuesday.

Friday night was just the appetizer, meant to whet the whistle of the Canadian team. The main course starts in just over a week.