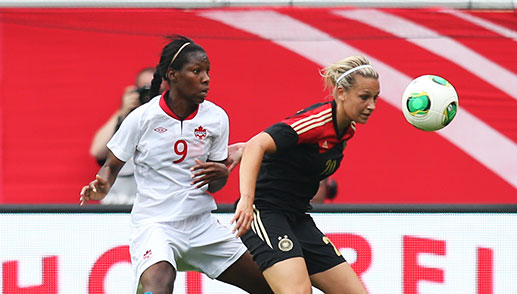 Canada’s Women’s National Team Head Coach John Herdman has named his 20-player squad that will be Canada’s entry at the 2013 Torneio Internacional Cidade de Sao Paolo, held in the Brazilian capital of Brasilia.

The squad marks the return of defender Kadeisha Buchanan, who’s been a revelation for Canada this year but who has been otherwise unavailable the last few months due to commitments as a member of the West Virginia University Mountaineers.

It will also be a first camp with the senior national team for midfielder Jessie Fleming. Fleming most recently captained Canada in their runners-up performance at the CONCACAF Women’s Under-17 Championship where Canada managed to qualify for next year’s FIFA Women’s Under-17 Championship set to take place in Costa Rica despite a loss in the finals on penalty kicks to Mexico.

“The mantra still is, if you’re good enough you’re old enough,” said Herdman of Fleming. “It’s for Jessie to see a new level and work with some of her heroes and give her a chance to see if she’s someone who can impact the squad.”

Canada kicks off the action in Brazil against Scotland on 11 December. They’ll follow that up four days later against Chile before closing the round robin portion of the competition against the hosts on 18 December. A final classification game will take place on 22 December, which will conclude the calendar year for Canada.

“This group that we’ve got gives you a picture of what you could have in 2015 in the opening round (of the FIFA Women’s World Cup Canada 2015™),” said Herdman. “So it’s a chance to rehearse certain processes and learning from the event.”

The four-country tournament is in its fifth year in 2013. Canada last participated in the 2010 edition of the tournament and came away as tournament champions.