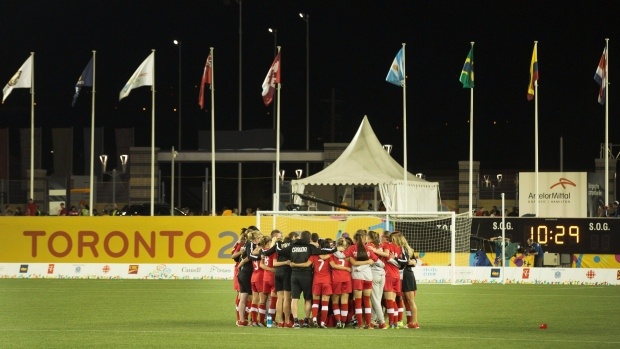 Canada finishes fourth at the Toronto 2015 Pan American Games, Mexico grabbing third place with the win. Brazil and Colombia will battle for Gold on Saturday.

It was a lack of goal – but clearly not of opportunities – that ended Canada’s Women’s National Team’s run at the Toronto 2015 Pan American Games on Friday night after conceding the bronze medal match 1:2 to Mexico.

The Canadians offered a great performance, maintaining most of the possession throughout and creating a number of chances, but remained seemingly cursed, not able to get the ball to cross the goal line despite lots of activity in the opponent’s final third.

“We really wanted to bring that bronze medal back home for Canada,” said 16-year old midfielder Gabrielle Carle after the match. “But really gave all we had, came back stronger in the second half and we were resilient we just couldn’t get that last one [goal].”

Carle was one of a number of standout performances on the night, as Head Coach Danny Worthington was quick to point out after the loss.

“I think what the young players have shown tonight is a resilient second half,” said Worthington. “For the second time in the tournament you’ve seen us outshoot, outcross the opponent, live in the opponent’s half, we had 59% of the play over the course of the game.”

“I’m very proud of these youngs’ [sic] performance tonight. I learned a lot about the team, seen some standout performances. Janine Beckie, she was great tonight. [Gabrielle] Carle, she’s grown over the tournament. Sixteen years old, what a performance! And some stand up play by Shelina Zadorsky. With Kadeisha off the park Shelina stepped up. Over the course of the tournament, I think you’ve seen young players grow, there are a few bloomers there.”

Both Worthington and John Herdman, who was also on hand for the competition, noted the positives of the competition and how it had achieved the developmental objectives they had established for these young players.

“I think if you’re asking the Head Coach of the Women’s National Team and the program Director, we just got through a bronze medal match and every game we’ve been in it,” commented Herdman. “We’ve been in it against the number sixth team in the world, Brazil, that Mexican team is an experienced team, and that’s a team our Women’s National Team [international “A”] have beaten by one goal only in the last four games against them. So when you look at it, this was a great experience here tonight and our young girls, again, they take time just to get used to the rhythm, the speed, the type of style and tactics. That’s part of their learning, it’s part of their journey.”

“Coming out of it, the result was never important in my mind,” said Herdman. “What was important was the performance. It’s important in the players’ mind, they wanted to make the country proud and pick-up a Pan Am medal, and we’ve certainly pushed them towards that goal. But underneath it I’m smiling.”

“I feel like coming in to this tournament I didn’t have the same confidence as I have right now, and the same mental awareness of everything so I’m happy about that,” said Carle when asked about what she was taking from this competition despite the disappointing end.

And if anyone doubted the players’ intentions, up-and-comer Jessie Fleming, who competed in three FIFA World Cups in addition to this Pan Am tournament over the course of a year and a half, was quick to dismiss them.

When asked about what she thought was the hardest part of the soccer-heavy summer she just went through, she responded that it was “not bringing home the hardware for you guys [the fans]. It’s why we play, to make our people proud and to bring you guys something to cheer about. So a little disappointed that we couldn’t score in the past couple games. Just feel we could’ve done better.”

Canada finishes fourth at the Toronto 2015 Pan American Games, Mexico grabbing third place with the win. Brazil and Colombia will battle for Gold on Saturday.