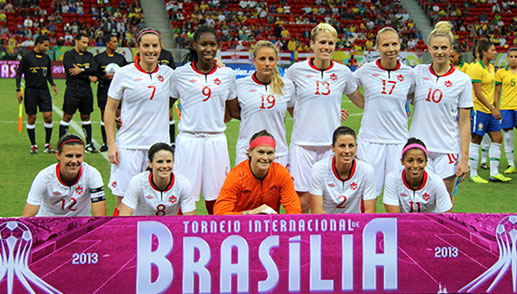 Canada WNT left everything on the field

Canada WNT left everything on the field

Canada will look to end the tournament on a high note, as they take on Scotland on Sunday afternoon

There wasn’t an ounce of energy left in Canada’s Women’s Soccer Team as they left the field after a game that crossed over officially into early Thursday morning.

The team had battled against the host Brazilian team, had seen Lauren Sesselmann get sent off with about 15 minutes to go, but still they looked like they had a winner against a team where there’s always a close game. Unfortunately, that goal just never came.

“Those girls were warriors tonight and all that we ever ask for is they put out a performance that Canada can be proud of,” said Head Coach John Herdman. “They left no ounce of Canadian out there and I’m just really proud. I hope people at home watched that and enjoyed a team that, when faced with resiliency, can come through.”

Only a win was enough to see Canada progress to the tournament final in Brasilia as Chile pulled out a 4:3 win earlier in the day over Scotland to put the pressure on the Canadians.

And though Canada couldn’t find the goal they needed, they effectively took Marta, one of the finalists for the 2013 Ballon D’or, out of the game. And while Brazil still managed to create a few quality scoring chances, goalkeeper Erin McLeod was up to the task that came her way.

“We’re disappointed because you want to go in and play Brazil again in the final but that’s football,” said Herdman. “We’ve taken four points out of the tournament. That would have qualified us for the next round of the Women’s World Cup if we were there.”

Canada will look to end the tournament on a high note, as they take on Scotland on Sunday afternoon in the tournament’s third place game. The two teams opened the tournament, with Canada coming away with a 2:0 victory.