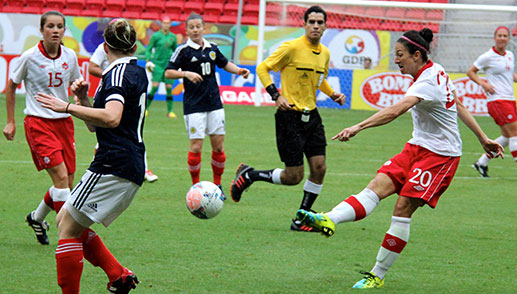 It was a performance where Canada’s Women’s National Team was the superior side just about everywhere on the pitch, playing Scotland for the second time in Brazil.

But until the 83rd minute, when Sophie Schmidt got the winner off a Diana Matheson corner kick, they hadn’t been able to dominate where it mattered the most.

“The girls deserved to get something out of that today and they did,” said Head Coach John Herdman, as Canada clinched third place at the Torneio Internacional de Futebol Feminino on Sunday. “It’s just about resilience, persistence to keep going, and I think we should have had it sewn up by halftime to be honest.”

Apart from a chance here and there, and a very near miss where Scotland hit the crossbar early in the second half, Canada looked comfortable. That certainly bodes well for the future considering Canada started 15-year-old Jessie Fleming, 16-year-old Sura Yekka, and 18-year-old Kadeisha Buchanan. If you include 21-year-old Adriana Leon, there are four players who could be involved in the Canadian team for a long time to come.

“In today’s game, we played with a 15, 16, and 18-year-old on the pitch and a 21-year-old all at the same time. So if you talk about the future I think things bode well,” said Herdman. “It’s going to be great for the future. I was very impressed with Jessie Fleming today and her composure in her (full) debut.”

Herdman did say the one concern from this game, and this tournament, was the team’s lack of scoring but pointed to the possible return of names like Jonelle Filigno, Melissa Tancredi, Josee Belanger, and Kara Lang as reasons to be optimistic that more scoring is just around the corner.