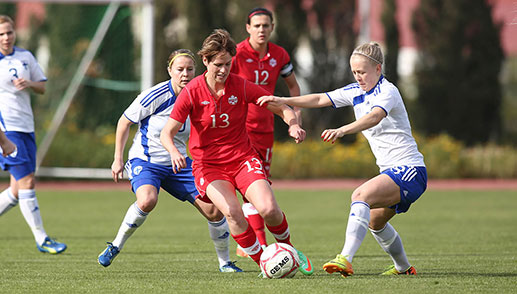 For most of Canada’s Women’s National Team’s first game of the 2014 Cyprus Cup, Head Coach John Herdman was watching from an elevated position across the field from his team’s bench.

He had a great vantage point for one of the best Canadian performances in some time as a Canadian team that was in imperious form as they easily rolled to a 3:0 victory over Finland.

It was a celebratory affair all-round for Canada as goalkeeper Karina LeBlanc celebrated her 100th start for Canada with a clean sheet.

“That was a pretty solid performance against a good Finnish team. This team very rarely gets beaten by that sort of scoreline,” said Herdman. “I’m really proud of the girls today. We really talked about adopting that DNA and bringing it into this tournament and I think we’ve started exactly how you want to start a tournament with three goals, three points.”

The win is really the result of chemistry built in the team over the last few months playing together in Burnaby at the Centralized Development Program. The plan is to have the team become tournament experts by the time the major tournaments in 2015 and 2016 roll around.

But back in December in Brazil, Canada got off to a strong start in their opening game victory over Scotland but slumped in their second game in losing 1:0 to Chile. The key now for the team is to see if they’ve learned from that previous tournament.

Herdman said that on that occasion, he might have given a few too many players a rest, which may have affected team chemistry. But he says they won’t make that mistake again and against Italy on Friday, they’re ready to show that.

“We have learned that lesson of keeping the chemistry right and which changes can we make to this team that have a massive impact and which ones might not,” said Herdman.