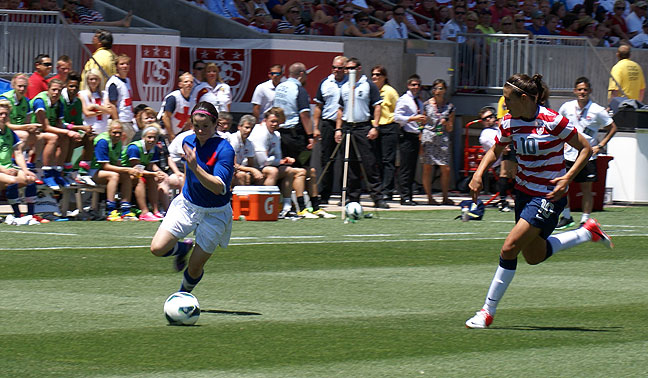 Canada officially concluded its North American preparations with an international test on Saturday 30 June in advance of the London 2012 Olympics. The Women’s International Friendly match wrapped up five months of preparations on this side of the Atlantic following a silver-medal performance at the 2012 CONCACAF Women’s Olympic Qualifying tournament in late January.

Canada fell 1:2 to CONCACAF rival and defending Olympic champion USA in Sandy, UT, conceding a late goal to American forward Amy Rodriguez. USA had the lead in the 15th minute after an unfortunate own goal by Canada, but Melissa Tancredi responded with an equaliser for Canada just before the hour mark.

“We had a game plan to keep it tight,” said Canadian head coach John Herdman. “Today, we were one goal away from the potential gold medalists.”

Canada will spend the next two weeks in Switzerland wrapping up the final touches on a six-month program heading into the London 2012 Olympics. Canada’s first match in 25 July against defending FIFA Women’s World Cup champion Japan.

“Our progress has been quite solid,” said Herdman of the team. “I’m quite happy. Physically we are not too far away from them (USA). Tactically and defensively, our back four was pretty solid and Erin (McLeod) made two world-class saves against the top team in the world.

“We also said there will be a moment when our opportunity will come and we better take it… and along came Tancredi at the right time.”