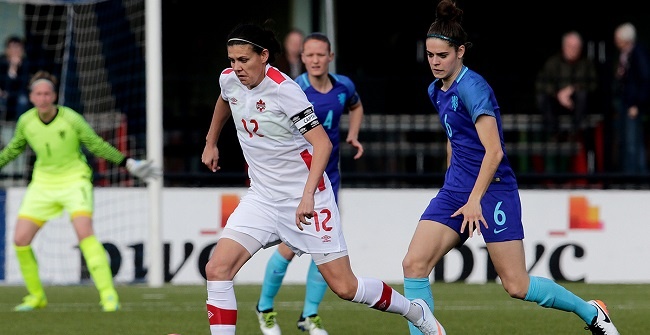 Canada Soccer’s Women’s National Team continued their momentum on the Road to the Rio 2016 Olympic Games with a second victory at their national camp in Netherlands. Following the 2:1 win on Sunday in an official Women’s International Friendly, Canada won 2:0 in an unofficial exhibition match on Tuesday behind closed doors.

Canada now looks ahead to a pair of home matches in early June in Ontario: the Road to Rio Women’s International Series in Toronto and Ottawa. Canada faces Brazil in both matches, with the first match at BMO Field on 4 June and the second match at TD Place on 7 June.

“We’re very excited to come back home,” said John Herdman. “They will be incredible matches. Anyone who’s watched us play against Brazil before know they are the most fiercely competitive games and the Algarve Cup has just heated things up. The fans are going to love it.”

Through both matches at the camp in Netherlands, coach Herdman had the opportunity to dress and feature all 19 players. Christine Sinclair and Janine Beckie scored in the first match while Melissa Tancredi and Diana Matheson scored in the second match.

“It has been a great camp for building on-field chemistry and maintaining momentum from the Algarve Cup,” said Herdman. “The second match ensured that every player had a chance to play maximum minutes during the this camp. We showed positive momentum from the first match.”

Both sides made changes to their lineups for the second match. While Canada is preparing for the Rio 2016 Women’s Olympic Football Tournament, Netherlands is preparing to host next year’s UEFA Women’s EURO 2017.

“Our players showed chemistry across both matches, so that bodes well when trying to build depth towards the Olympic Games,” said Herdman.

As for the Rio 2016 Women’s Olympic Football Tournament, Canada will learn their opponents and schedule on Thursday 14 April via the Official Draw at the Maracanã. Coach Herdman will be in Vancouver to meet Canadian media following the draw.