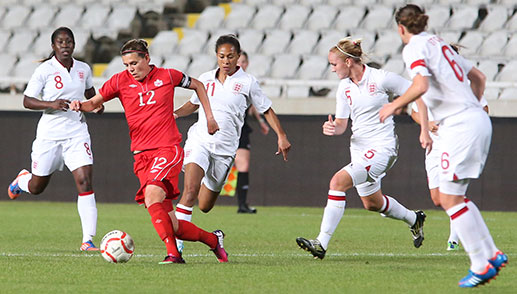 This 18-player preliminary roster will most likely see additional young faces added to the mix by the start of the camp on Thursday 24 October.

Canada WNT has announced its preliminary roster for its International Friendly against Korea Republic scheduled for this Wednesday 30 October (19.00 local kick-off) at Commonwealth Stadium in Edmonton, AB.

This 18-player preliminary roster put together by Head Coach John Herdman will most likely see additional young faces added to the mix by the start of the camp on Thursday 24 October.

The squad features 13 players who were part of Canada’s bronze-medal-winning roster at London 2012.

Sura Yekka, a 16-year-old defender from Mississauga, Ontario, has earned her first call-up to a Canada senior camp after having participated in a couple youth camps earlier this year.

Of the 18 players named to the current roster. 12 were in uniform when the two countries last faced off.

“South Korea will be a tough test for us,” said Head Coach John Herdman. “Our 1:3 lost to them in January this year and their recent win over Japan has shown we will need to be on our game to get a result while still developing our new playing models.”

The match in Edmonton will be Canada’s first women’s fixture at Commonwealth Stadium since a 2005 friendly against Germany. The contest between Canada and Korea Republic will be a precursor to the FIFA Women’s World Cup Canada 2015 as Canada will play the Opening Match in Edmonton.

“This event provides the team with an excellent opportunity to develop the processes and systems around playing in the stadium where we’ll play our opening match at the FIFA Women’s World Cup and to continue to learn how to play at home,” added Herdman.