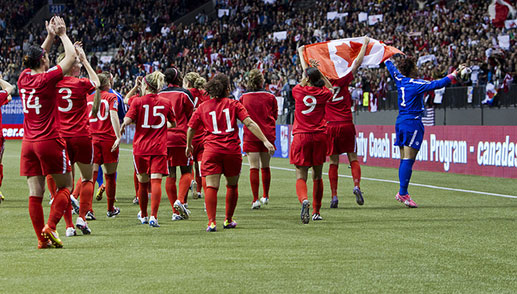 Canada Women’s National Team has announced its camp roster for its Women’s International Friendly against Mexico scheduled for this Sunday 24 November (13.00 local kick-off) at BC Place, Vancouver, BC. The match, presented by Bell, will mark Canada’s WNT return to Vancouver and the first time the two nations face off since Canada booked its ticket to the 2012 London Olympic Games with a 3:1 win over Mexico at the CONCACAF Women’s Olympic Qualifying tournament held in Vancouver in January 2012.

The 23-player camp roster, selected mostly from players currently attending the centralized development camp in Burnaby, BC, will only see 21 formally dress for the weekend’s friendly match.

The group will count on a strong core of players, 18 of them having reconnected in Edmonton for the October friendly, a 3:0 win against Korea Republic.

Sura Yekka, the 16-year-old defender from Mississauga, ON, who had earned her first call-up to a Canada senior camp in Edmonton, will also feature.

Rachel Melhado, a 20-year-old defender who currently plays for University of Louisville in USA, will be participating in her second senior camp. She has previously featured for Canada in the WNT 0:1 loss to Germany this past June, and at the U-18 and U-20 levels.

Of note, this camp marks the return to training of two well known players, strikers Josée Bélanger and Kara Lang. Both missed the 2012 journey because of injuries, after helping the Canadian team win the 2010 CONCACAF Women’s Championship.

“They both have a history of scoring important goals for Canada,” said Canada’s Head Coach John Herdman. “There’s a real need for more goals, so we are constantly working on developing our pool of forwards.”

Rounding up the group is midfielder Selenia Iacchelli, an Edmonton, AB, native, who last represented Canada at the youth level at the FIFA U-20 Women’s World Cup Russia 2006.

“There’s a healthy rivalry with Mexico and I know they will be ready for this game,” added Herdman. “We’ll be diligent with our work as well as keep focused on our goals leading into 2015.”

Tickets for the Canada-Mexico match on 24 November, on sale via Ticketmaster, are still available starting at $15 (plus applicable fees). Fans attending the match are invited to BC Place’s Terry Fox plaza starting at 11.00 local time for a fan fest. In addition, the first 2,500 ticket holders at the match will receive on entry a special edition player card pack featuring some of Canada’s WNT Olympians.

“Vancouver has shown us in January 2012 that it was a city passionate about soccer, and lifted our Women’s National Team to an Olympic Qualification,” said Peter Montopoli, Canada Soccer General Secretary. “We look forward to seeing another boisterous crowd at BC Place cheering on the team as it continues its preparation for the FIFA Women’s World Cup Canada 2015.”