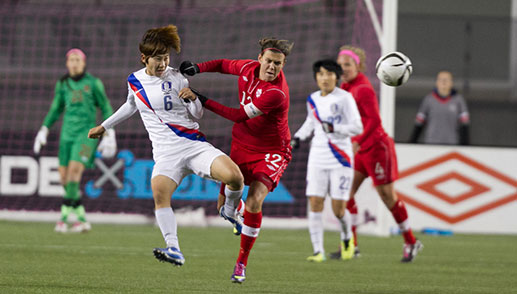 Canada‘s Women’s National Team concluded its week in Edmonton, AB with a 3:0 win over Korea Republic.

Canada‘s Women’s National Team concluded its week in Edmonton, AB with a 3:0 win over Korea Republic.
Captain Christine Sinclair got Canada started with her 146th career goal in the 24th minute before Brittany Timko and second half substitute Adriana Leon got in on the party, scoring at the 39th and 69th minute respectively.
But it was the strong performance by Canada’s two Alberta native goalkeepers, Erin McLeod and Stephanie Labbe, that allowed the squad to preserve the clean sheet.

“It was fantastic to see 12,000+ people in mid-October on a cold night,” said Canada’s Head Coach John Herdman. “They saw three goals, which is great. And hopefully they’re going to see that win the first game of the World Cup when we’re here. So 12,000 people are going to turn into 60,000 or 55,000 when we turn up again next.”
“For the game itself, we tried a few new players. At times you just see the quality in Matheson, Sinclair, Schmidt; when they combine together this Canadian team looks fantastic,” added Herdman. “All in all, the Koreans were good for the game. They deserved a goal or two. It could have been a closer match but it shows we’ve still got a bit of work to do.”
Canada WNT now heads into residency in Vancouver, BC, where it will play its next match on 24 November, at BC Place. Tickets for the match are on sale via Ticketmaster, and all the information is available on canadasoccer.com.