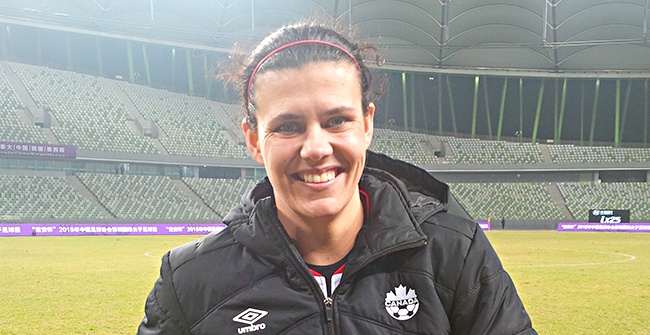 Canada wins all three matches at the January international tournament.

Canada swept the table at the BaoAn Cup CFA Women’s International Football Tournament Shenzhen 2015, a four-nations tournament in China PR. The Canadian team won all three of their round-robin matches, with 2:1 victories over Korea Republic, Mexico and China PR from 11-13 January.

This marks the first time Canada has won China PR’s four-nations competition, an annual event that usually kicks off the new year. Canada previously attended the competition in 2004 (Shenzhen), 2008 (Guangdong), 2011 (Yongchuan), and 2013 (Yongchuan).

Christine Sinclair led the Canadian team with three goals, including both goals against hosts China PR. Sinclair was also named Most Valuable Player of the tournament.

All four nations at this year’s competition are currently preparing for the FIFA Women’s World Cup Canada 2015™. While Canada and China PR are in Group A (and even play the opening match on 6 June), Korea Republic is in Group E and Mexico is in Group F.