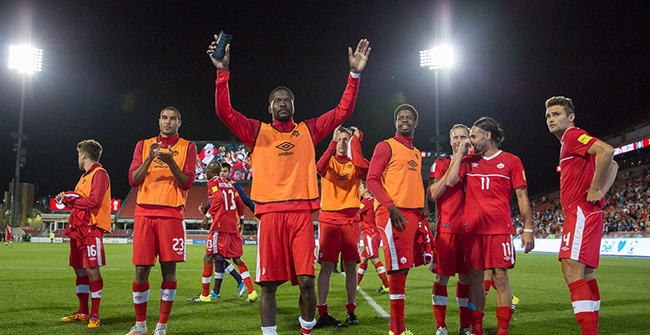 Canada got off to a good start with a 3:0 win in their FIFA World Cup Qualifiers playoff series against Belize, with the two-match, total goals series wrapping up on Tuesday 8 September in Belmopán, Belize. The boys in red dominated possession at home, with man-of-the-match Tosaint Ricketts scoring two of his team’s three goals.

The Canada victory was the most emphatic on the opening night of CONCACAF Round 3 of FIFA World Cup Qualifiers. In five other matches: St. Vincent and the Grenadines won 2:0 at home over Aruba; Antigua and Barbuda won 1:0 at home over Guatemala; El Salvador won 1:0 away over Curaçao; Haiti won 3:1 away over Grenada; and Nicaragua won 3:2 away over Jamaica.

Canada’s winger Ricketts scored on either side of the break as the home side built a 2-0 lead shortly after the one-hour mark. Veteran Atiba Hutchinson made it 3-0 late in the match while goalkeeper Kenny Stamatopoulos and his defence picked up the clean sheet. Canada has conceded only one goal in their last seven international matches.

“We controlled the game from start to finish,” said Hutchinson. “We played some good football, we created a lot of chances, and we had crosses coming in from the left and right side. It was a good attacking performance and we are happy with the result. Most importantly, we didn’t give up any goals, so all in all it was a good performance.”

All six CONCACAF return legs will be played on Tuesday 8 September, with the Belize-Canada match kicking off at 19.00 local (21.00 ET / 18.00 PT). Canada will take a day off on Saturday before traveling south to Belize on Sunday. The winner of the two-leg series will advance to CONCACAF Round 4 to join Mexico, Honduras and the winner of the El Salvador-Curaçao series in a four-team, round-robin group phase.