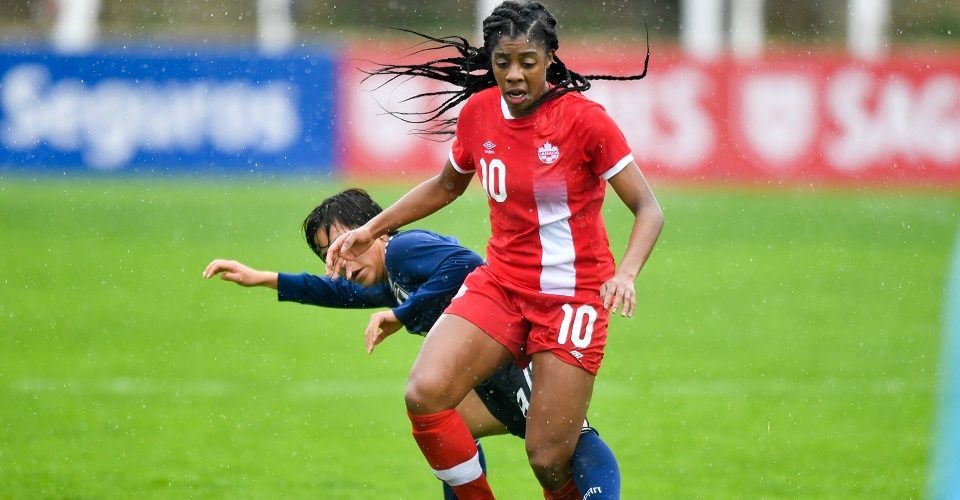 Canada defeated former FIFA Women’s World Cup™ champions Japan by two goals in their final match of the 2018 Algarve Cup.  Janine Beckie and Ashley Lawrence were the goalscorers as Canada won 2:0 over the reigning AFC Women’s Asian Cup winners. Canada won three of their four matches to finish fifth spot in the annual international soccer tournament.
Despite chilly temperatures and sustained rain with a few downpours during the match, Canada kept the heat on Japan throughout their 7 March finale at the 2018 Algarve Cup.

“We achieved one of the key goals we set out prior to this tournament: bring this team back together after a long break, build on the team’s foundation with some different tactics, and give more players high-level tournament experience,” said Head Coach Kenneth Heiner-Møller.  “We played all 23 players throughout the group stage, which shows the depths of this squad and we played a variety of styles during the tournament.”
Janine Beckie opened scoring for Canada in the 25th minute, surprising Japan’s goalkeeper Ayaka Yamashita with a shot high into the right corner.  Beckie’s first shot hit her opponent, which appeared to deflect of a hand, but Beckie promptly fired the rebound into the top corner of the net to make it 1-0.
Canada came out of the half -time break attacking and did not let up. Ashley Lawrence scored in the 50th minute after being fed the ball by captain Christine Sinclair and cutting across the box to slip it past a sprawling Japan goalkeeper. Lawrence stripped the ball first from Yui Hasegawa, then from Saki Kumagai, before slipping the ball past a surprised and out-of-position Yamashita.
Canada continued breaking into Japan’s end, creating several chances which had their opponent on the backfoot.
Japan’s best chance came shortly before the final whistle after they were awarded a penalty kick.  Labbé made a kick save, sending the ball to the crossbar and back into play. She finished the match with her 21st career clean sheet.
Canada started Stephanie Labbé in goal, Ashley Lawrence at right back, Kadeisha Buchanan and Rebecca Quinn at centre back, Allysha Chapman at left back, Diana Matheson, Jessie Fleming and Desiree Scott in the midfield, and Christine Sinclair, Nichelle Prince and Janine Beckie up front.
Canada replaced Matheson with newcomer Julia Grosso in the 32nd minute, then Beckie and Prince with Maegan Kelly and Jordyn Huitema in the 71st minute, Sinclair with Adriana Leon in the 80th minute, and Grosso with Sophie Schmidt in the 87th minute.
Canada fell 3:1 in its opening match of the Algarve Cup,  playing together for the first time since November’s home and away international friendly matches against USA and Norway. Sweden, the Rio 2016 Silver Medalists, opened scoring late in the first half.  Canada rallied coming into the second half with a goal in the 47th minute from Janine Beckie, assisted by Nichelle Prince. Sweden scored twice again in the 52nd and 87th minutes to secure the win.

Canada came away with a 1:0 victory in its second group stage match of the 2018 Algarve Cup after featuring a different lineup from its opening match.  Playing a 3-5-2 formation with Christine Sinclair and Jordyn Huitema on the front line, Canada dominated their opponent with an aggressive attack up the sidelines.  Sinclair was the lone goal scorer in the match, burying a penalty kick in the 25th minute.
Canada defeated Korea Republic 3:0 in final Algarve Cup group stage match, with Captain Christine Sinclair and Jessie Fleming scoring for Canada.  Sinclair earned her 171st and 172nd international goals, putting her now only 12 goals back from the world record, while Jessie Fleming earned her fifth goal on the occasion of her 50th appearance.
“We’ll review the four games we played here and learn from them and then we’ll be shifting our focus to our next big challenges, the game against France in April and Germany, at home, in June,” said Heiner-Møller.  “Our focus remains on preparing for the FIFA World Cup Qualifiers tournament later this year, so every opportunity we have together as a team is a learning experience and an chance to further develop as a team.  Our experience here at the Algarve Cup has certainly been beneficial in that way.”

Canada’s next match will be against France, ranked 6th in the FIFA Women’s World Rankings, 9 April (21.00 local /15.00 ET / 12.00 PT) as it continues to gear up for the 2018 CONCACAF Women’s Championship.  The international friendly, against the FIFA Women’s World Cup France 2019™ hosts will take place at Roazhan Park in Rennes, one of nine stadiums to be used during the tournament.

Canada will then play Germany, ranked second in the FIFA Women’s World Rankings, at home in Hamilton, Ontario on 10 June 2018. Canada, the two-time Olympic Bronze Medal winners and ranked fifth in the world, will welcome the reigning Olympic Champions to Tim Hortons Field for the Sunday afternoon match (14.00 ET / 11.00 PT).

Beyond Canada’s home match in Hamilton this June, Canada are ultimately preparing for this year’s qualification phase to the FIFA Women’s World Cup France 2019™. Canada will compete in the 2018 CONCACAF Women’s Championship from 4 to 17 October from which the top-three nations will all qualify for France 2019 while the fourth-place nation will advance to an intercontinental playoff against the third-place nation from South America.
Fans can follow Canada’s journey on the road to the FIFA Women’s World Cup France 2019™ across Canada Soccer’s digital channels including CanadaSoccer.com, Facebook, Twitter, and Instagram.
Tickets for Canada vs Germany in Hamilton
Individual tickets to the Canada v Germany match will go on sale to the public on International Women’s Day, Thursday 8 March, via Ticketmaster.ca. The launch of ticket sales will be preceded by a 48-hour pre-sale for Canada Soccer Insiders. Tickets to the match start as low $20 (plus applicable fees) and fans will once again be able to take advantage of a ‘Me+3’ offer in select sections.