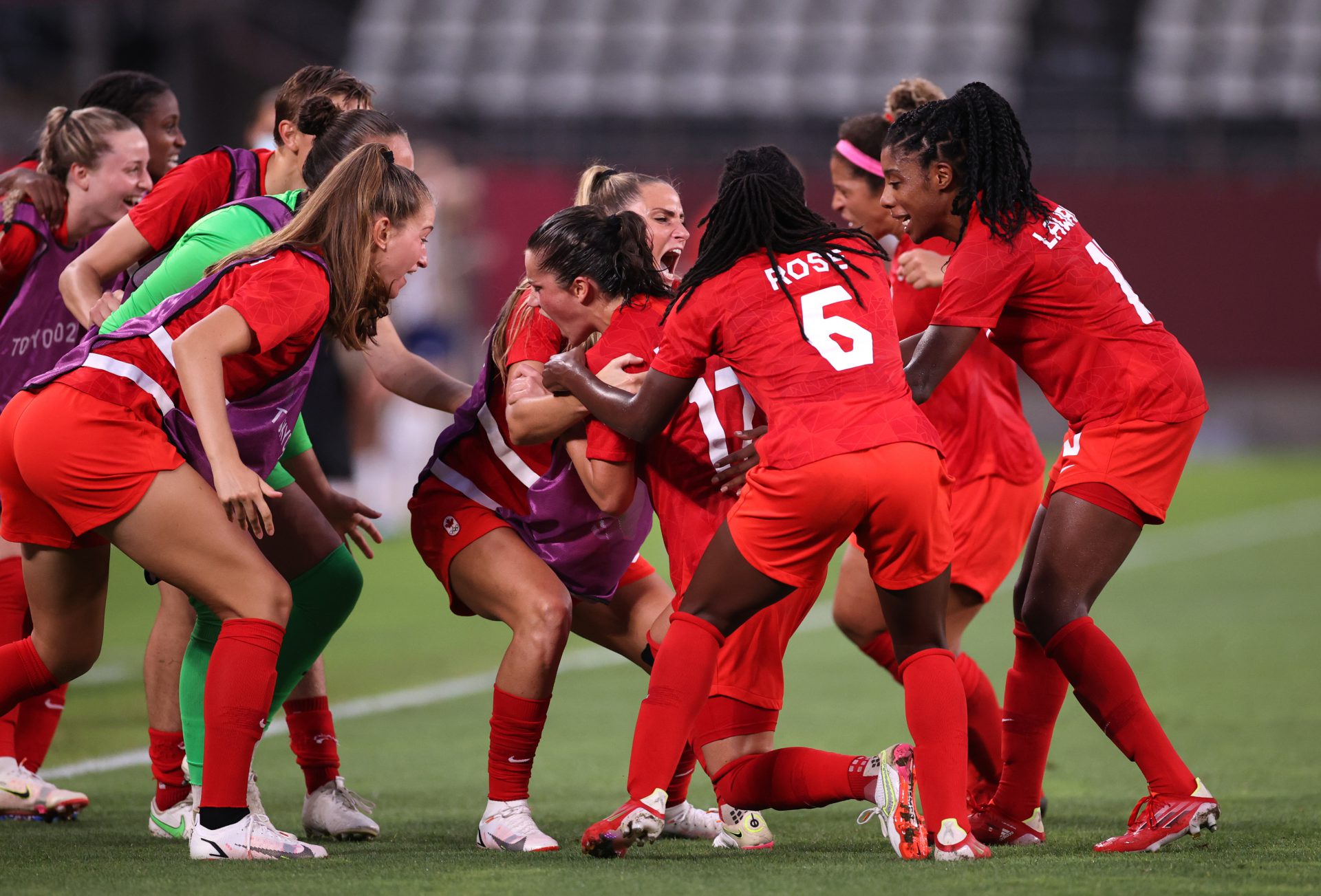 Canada will play for the Gold Medal with historic 1:0 win over USA at Tokyo 2020

For the first time ever, Canada Soccer’s Women’s National Team will play for an Olympic Gold Medal after their 1:0 win over USA in the Tokyo 2020 Olympic Games Semi-finals. Jessie Fleming converted a penalty in the 75’ minute, which secured this momentous win for Canada and their place on the podium for a third consecutive time. By reaching the Final, Canada will become just the third nation to win medals at three successive Women’s Olympic Football Tournaments, joining USA (1996 to 2012) and Germany (2000 to 2008).

“All credit to the players, they left everything out there. It meant so much to them to get to this Final. I think you saw that in the shift that they’ve put in,” said Head Coach Bev Priestman.  “There’s some veterans on this team that still feel that hurt from London 2012. I’m over the moon for that group of players to get that, and someone like Christine now gets to go to an Olympic Final, they’ve done so much for the program. For us, we were clear, we wanted to change the colour of the medal. Winners win and we’re going into that final to get a gold medal. “

Canada remains undefeated at Tokyo 2020 with a 3-0-2 record and is the only nation in the world to reach the podium at London 2012, at Rio 2016, and at Tokyo 2020 in women’s football. Entering Tokyo 2020, Canada was the first Canadian Olympic team to win back-to-back medals at a summer Olympic Games and will build on that record by guaranteeing that they change the colour of the medal with their advancement to the Gold Medal match. This 1:0 victory also marks Canada Soccer’s Women’s National Team’s first win over USA in 20 years.

“Our goal heading here was to change the colour of the medal after back-to-back bronze medals. What a performance, what a fight, I’m just so proud of our team, and one more to go,” said Captain Christine Sinclair. “For those of us who were part of 2012, it was nice to get a little revenge in an Olympic Semi-finals. This is a very unique and special group, one I’m very proud to be part of, we fight for everything. Job one is done for us, changing the colour of the medal, but now that we’re in the Final, we go for it. This tournament is grueling, that’s why I’m proud that we have 22 players strong that can step on the field and make a difference and they have this tournament.”

Canada qualified for the Semi-finals with a win on penalty kicks over Brazil in the Quarter-finals. The depth of Canada Soccer’s Women’s National Team has been key to Canada’s advancement to the Gold Medal match with eight players making their Olympic debuts (Kailen Sheridan, Adriana Leon, Evelyne Viens, Julia Grosso, Jayde Riviere, Vanessa Gilles, Jordyn Huitema, and Gabrielle Carle) and all 22 players of Canada’s extended roster having dressed during the competition.

Of note, Head Coach Bev Priestman was the only female Head Coach leading their team in the Semi-finals having served as an Assistant Coach with Canada when they won their Bronze Medal at Rio 2016.

“This is my first win ever against the USA and what a perfect time to win against them, said Kadeisha Buchanan. “We got the win and we got the goal. The job’s not done for us.”

Canada came out ready for the US press. Vanessa Gilles stepped forward to play a long, direct ball out of the back to Jessie Fleming in the first minute to relieve the pressure. Ashley Lawrence and Fleming combined well wide in the 2’ to the same effect.

Canada’s defensive organization has been a strength all competition and Christine Sinclair showed in the 5’ that she remained committed heading a free kick clear. Nichelle Prince also tracked back in the 10’ showing Canada’s resolve to defensive organization. Fleming played through to Prince in the 18’ but the ball was just out of reach.

A few minutes later, US GK Allysa Naeher went down awkwardly in her box. After a lengthy delay and attempt to remain in the game the US had to make an injury replacement with Adrianna French entering the match. Janine Beckie contributed to the focus on defensive transition in the 31’ working back to apply pressure and force problems for the US.

With six minutes of added time at the end of the first half, the US began to pressure. Alex Morgan’s header midway through the injury time was the best chance for the US, however, and was well wide.

Canada continued their composed play out of the back to start the second half. Kadeisha Buchanan and Lawrence each making vital dribbles to play out of pressure in the 47’. Gilles ownership of the Canadian 18-yard box was also a staple of the second half. Midway through the second half, the US began to attack in waves after a triple substitution. Canadian goalkeeper Stephanie Labbé was up to the task. making two key fingertip saves over the bar, punching away a dangerous set piece and stopping a point-blank Lindsay Horan attempt in the span of five minutes around the 65’.

Christen Press’ 71’ shot was saved by Labbé in what was to become a turning point in the match. Just two minutes later, Deanne Rose took the ball into the US area and was upended by Tierna Davidson. No call was made, but, a minute later Referee Kateryna Monzul was called to the VAR review booth and the PK was given. Jessie Fleming stepped up and fired past US backup Franch to give Canada the lead in the 75’.

With 15 minutes to play, Canada committed to defend. Lawrence gave Megan Rapinoe all she could handle wide right, with Rose coming back to defend as well in the 82’. The US came close in the 86’ as second-half substitute Carly Lloyd headed off the crossbar, but Canada were able to make two late substitutions and hold on.

Canada’s starting XI featured Stephanie Labbé in goal, Ashley Lawrence at right back, Vanessa Gilles and Kadeisha Buchanan at centre back, Allysha Chapman at left back, and Quinn, Desiree Scott, Jessie Fleming, Janine Beckie, Christine Sinclair and Nichelle Prince from the midfield up through to the attack. In the second half, Head Coach Bev Priestman replaced Quinn with Julia Grosso and Prince with Deanne Rose (60’), Sinclair with Jordyn Huitema (88’), and Rose with Adriana Leon (90’).