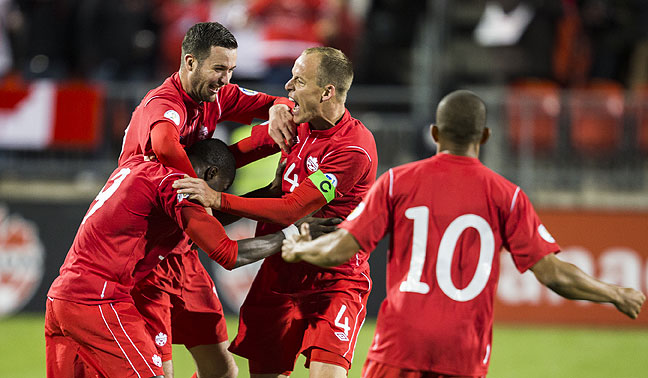 Canada moved to within a point of advancing to the CONCACAF Final Round following a 3:0 home win over Cuba on Friday 12 October 2012. The Match Day 5 win at BMO Field came in the penultimate CONCACAF 3rd Round match before next Tuesday’s group finale in Honduras. Panama (+4) and Canada (+3) are first and second in the group with 10 points each while Honduras is just a touch behind in third place with eight points (+2) after five matches.

Tosaint Ricketts, Will Johnson and player-of-the-match David Edgar all scored in the Canadian victory.

In other CONCACAF 3rd Round matches, no teams qualified on 12 October, but Guyana was officially eliminated in an 0:5 home loss to Mexico. El Salvador could have qualified for the next round with a home win, but lost 0:1 to Costa Rica. With one match left, it will be either Costa Rica (seven points, +2) or El Salvador (five points, -1) who joins Mexico in the next round. Costa Rica will be at home against Guyana while El Salvador will be on the road against perfect Mexico.

In Group B, USA won away 2:1 over Antigua and Barbuda while Guatemala won at home 2:1 over Jamaica. USA needed a 90th minute goal to win on the road while Guatemala waited until the 85th minute to get their winner. USA and Guatemala are tied with 10 points and +3 goal difference, with their last match against each other on 16 October in Kansas City, KS. Jamaica, still in the running with seven points and 0/even goal difference, will host Antigua and Barbuda on Tuesday.