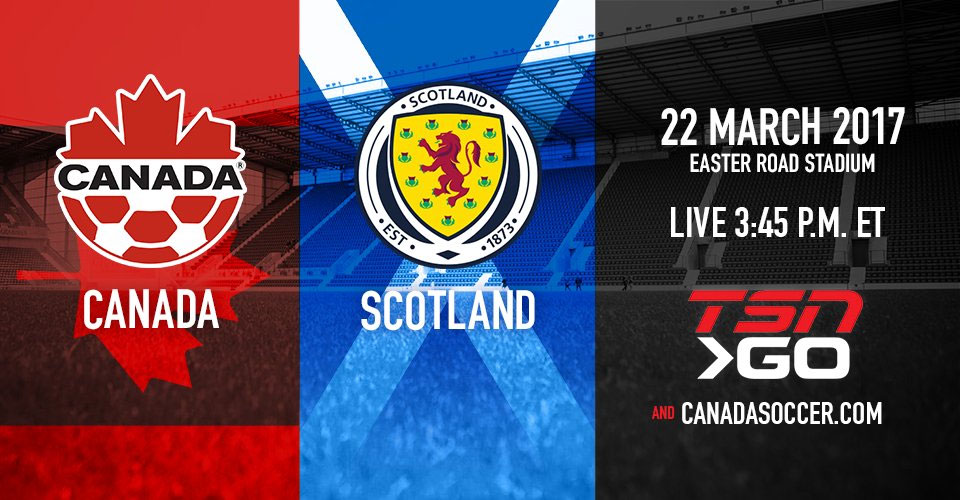 Canada continues preparations for this summer’s CONCACAF Gold Cup when they face Scotland in a Men’s International Friendly match in Edinburgh on 22 March.

The 2017 match will be broadcast live on CanadaSoccer.com and TSN GO at 15.45 ET / 12.45 PT this Wednesday. Canada Soccer will provide in-match coverage from Easter Road Stadium in Edinburgh via Canada Soccer’s digital channels including Twitter, Facebook, Instagram, Snapchat, and Flickr.

Canada’s squad has a mix of both experience and youth, including Scott Arfield and David Hoilett, who in 2016 co-led Canada in assists at the international level. Arfield started his career in Scotland before moving to England where he now plays for Burnley FC in England’s Premier League. Hoilett, meanwhile, plays for Cardiff City FC in England’s Championship.

Canada Soccer announces squads to compete in Scotland and Qatar

Over the past two years since the 2015 CONCACAF Gold Cup, Canada’s record is eight wins, four draws, and six losses in 18 international matches, including most recently a 4:2 win over Bermuda. Over the same period, Scotland’s record is three wins, two draws, and six losses in 11 international matches. Just four days after the 22 March friendly, Scotland will face Slovenia in FIFA World Cup Qualifiers on 26 March in Glasgow.

Canada Soccer’s Men’s National Team Program is currently preparing for the 2017 CONCACAF Gold Cup, which runs 7 to 26 July across 13 venues in USA. Taking place every two years, the CONCACAF Gold Cup is the official national team championship of North America, Central America and the Caribbean. Drawing large crowds and millions of television viewers from across the region, the Gold Cup is a celebration of soccer, sportsmanship, and culture.

CANADA IN MONTRÉAL
Already on the calendar for the next international window, Canada’s upcoming home match is Tuesday 13 June at Stade Saputo in Montréal. The match will feature Canada against Curaçao, two nations preparing for this summer’s CONCACAF Gold Cup.

Canada Soccer’s Men’s National Team will play in Montreal this June ahead of the @GoldCup https://t.co/iUfgjqUu2t pic.twitter.com/63AF2obztL

Tickets for the Canada v Curaçao match will go on sale on Wednesday 29 March at 10.00 local time via canadasoccer.com (10.00 ET / 07.00 PT). The launch of ticket sales will be preceded by a pre-sale for Canada Soccer Insiders, and past purchasers of Canadian National Team matches. Fans interested in receiving access to the presale offer for these matches are encouraged to subscribe to the #CanadaRED newsletter via canadasoccer.com. Tickets start at just $20 and have been priced to ensure that the match is accessible for all members of the Canadian soccer community.