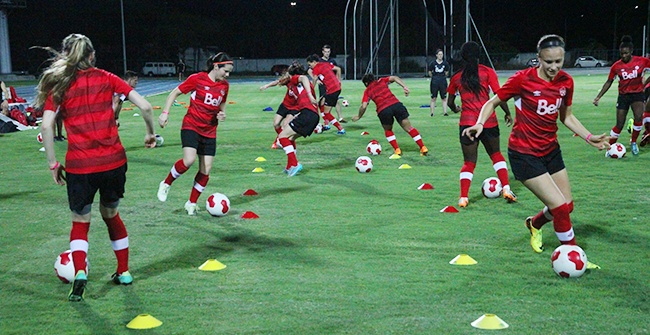 Canada to face regular foe in first match of Natal 2015

Canada to face regular foe in first match of Natal 2015

When Canada faces Mexico in the first match of the 2015 International Tournament of Natal, they will be stepping on the pitch with a team they know well, and that knows them.

When Canada faces Mexico in the first match of the 2015 International Tournament of Natal, they will be stepping on the pitch with a team they know well, and that knows them. The tournament opening match takes place today, 9 December 2015, at the Arena das Dunas (18:15 local kick-off | 16:15 ET/13:15 PT).

Head Coach John Herdman is using Natal 2015 as a testing ground, as he assesses his team, including several young players, for the CONCACAF Women’s Olympic Qualifying Championship taking place in Texas in February. The top three teams from the qualifying tournament will book a ticket to the Rio 2016 Olympics next summer.

“The first match against Mexico is going to give us an interesting test,” said Herdman said about the upcoming match. “We know a little bit about Mexico, they know about us; we’ve played each other a lot, so I am please it is a team we know and give these younger players an opportunity to test themselves. Some of them experienced it in the Pan Ams, but we know a month and a half out from an Olympic qualifier this is going to be Mexico’s best squad and it’s going to be a tough match.”

Canada’s first match against Mexico is certain to be a tough one, with Mexico looking to redeem themselves after their last two tournament meetings , most recently when Canada outplayed EL Tri 2-1 in Shenzhen China in January, and the critical match in which Canada snatched the last spot at the 2012 London Olympics with a decisive 3:1 win in the semi-final of 2012 CONCACAF Women’s Olympic Qualifying. Captain Christine Sinclair led the way with two goals while Melissa Tancredi added another. Both forwards are on the roster when Canada meets Mexico again tonight.

Herdman was circumspect when discussing his approach to the match. “How much are we going to show Mexico knowing that they could be our fourth place, third place playoff, or even a finalist in the CONCACAF Qualifying Championship,” he said. “There’s a little bit of hiding some of your cards.”

At the end of the day, Canada’s coach and team are focused on getting a result. “These senior players, and the younger players too, they play to win, so we have to push for that,” Herdman said. “But at the same time I’ve just have to keep in sight by the end of this period, December 22nd, I want to have a clear mind of which players are going to take us through to the CONCACAF qualifiers.”