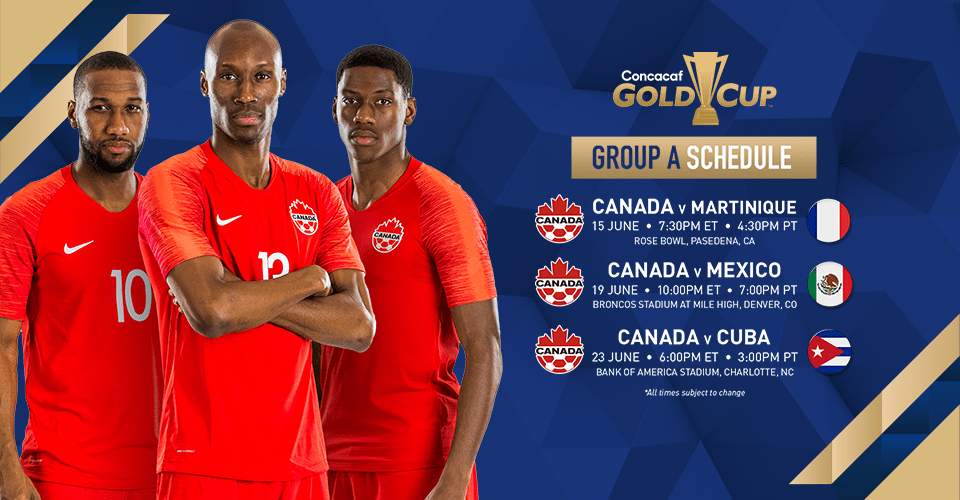 Canada to face Mexico, Martinique and Cuba at the 2019 Concacaf Gold Cup

Canada to face Mexico, Martinique and Cuba at the 2019 Concacaf Gold Cup

Canada Soccer’s Men’s National Team will face Martinique, Mexico and Cuba in Group A of the 2019 Concacaf Gold Cup this June fresh from an undefeated […]

Canada Soccer’s Men’s National Team will face Martinique, Mexico and Cuba in Group A of the 2019 Concacaf Gold Cup this June fresh from an undefeated Concacaf Nations League Qualifying campaign in which they posted four wins and a +18 goals difference. The biennial Concacaf Gold Cup provides Canada with a valuable next step as the nation faces the region’s top teams for the first time since 2017, with a notable group-stage clash against 10-time Concacaf champions Mexico.

Canada will play in the first match of the tournament when they face Martinique on 15 June in Los Angeles (19.30 ET / 16.30 PT), Mexico on 19 June in Denver (22.00 ET / 20.00 MT), and Cuba on 23 June in Charlotte (18.00 ET). This marks the first time the Concacaf Gold Cup expands to 16 nations. From four groups, the top-two nations in each group will advance to the competition’s Quarterfinals to be played in Houston and Philadelphia. The Concacaf Gold Cup continues with the Semifinals on 2 July in Glendale and 3 July in Nashville followed by the Final on 7 July in Chicago.

Canada’s toughest opponent will be Mexico, who have won four of the last five encounters since 2008. Canada’s last point against Mexico was a 2:2 draw in Edmonton in FIFA World Cup Qualifiers in 2008 while their last victory was the golden-goal victory in the Quarterfinals of the 2000 Concacaf Gold Cup.

Canada will open against Martinique, whom they have faced in four previous matches since 1993. The two sides share an even record with a win and two draws each.

Canada will close the group phase against Cuba, the same nation with whom they have been drawn for 2019-20 Concacaf Nations League. Canada won the two most recent matches in FIFA World Cup Qualifiers in 2012, with Cuba at the time the reigning Caribbean champions.

“We have a talented group, but now they will be fully tested in a tournament setting,” said Herdman. “The team are motivated to do well for Canada.”

Canada qualified for both the 2019 Concacaf Gold Cup and 2019-20 Concacaf Nations League Group A by finishing second in the qualification stage with four wins, 12 points, 18 goals scored, and just one goal conceded. In those four victories, Canada scored nine goals in home victories in Toronto and Vancouver, the most ever in back-to-back home matches for the Men’s National Team.