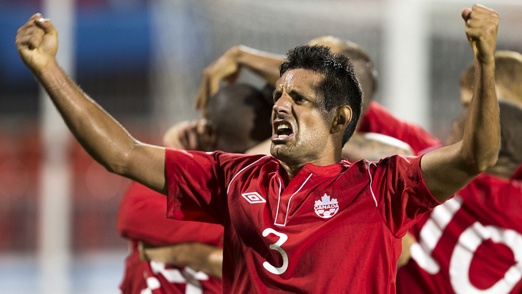 Canada to face Cuba at BMO Field on Friday

Canada to face Cuba at BMO Field on Friday

Canada-Cuba match kicks off at 19.30 at BMO Field.

Canada will face Cuba this Friday 12 October 2012 in a FIFA World Cup Qualifiers match at BMO Field in Toronto. The two sides will meet on Match Day 5 at 19.30 local, with Canada in a three-way fight for one of two Group C spots to next year’s CONCACAF Final Round of the 2014 FIFA World Cup Brazil Qualifiers.

Canada, Honduras and Panama are the three Group C teams with a chance to advance to the CONCACAF Final Round. On the same night Canada hosts Cuba, Panama hosts Honduras.

“We are in control of our destiny,” said Canadian head coach Stephen Hart. “We have two games to play: the one at home from which you have to get a result and the one on the road from which, with a bit of luck, you can get a result there, too.”

Tickets to Canada-Cuba match on 12 October are available via ticketmaster.ca or by phone at 1.855.570.7500, with full information available on CanadaSoccer.com. Group discounts are available via marketing@soccercan.ca or 613.237.7678.

“The Canadian fans have been fantastic,” said Hart. “There is a different energy now in the stadium. If they can continue to push us along, we need that (support) and the players love it. The crowd needs to be our 12th man.”

Heading into Match Day 5, Panama has nine points while both Canada and Honduras have seven points each. On Match Day 6 – the group finale – Cuba hosts Panama while Honduras hosts Canada.

Canada and Friday opponent Cuba have already met once in this group stage. It was 10-man Canada that came away with an away 1:0 win in La Habana, Cuba.

At home this year, Canada had an 0:0 draw with Honduras and a 1:0 win over Panama. On the road, Cuba had 0:1 defeats in Panama and Honduras.

Along with Canada, Cuba, Honduras and Panama, eight other teams are participating in this CONCACAF 3rd Round of the 2014 FIFA World Cup Qualifiers. In Group A, Guatemala, Jamaica and USA are in a three-way tie with seven points each (Antigua & Barbuda has been eliminated). In Group B, Mexico is through while El Salvador (five points), Costa Rica (four points) and Guyana (one point) are in search of second place.