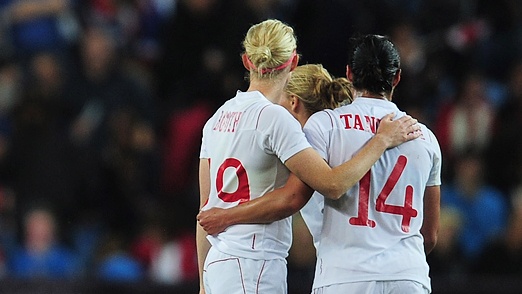 Canada to battle for bronze after heartbreaking deafeat to USA

Canada to battle for bronze after heartbreaking deafeat to USA

It was simply one of the best matches in the annals of Olympic football.

Canada turned in one of the most courageous performances in its history, three times taking the lead against rival USA in the 6 August semi-final at London 2012. Ultimately, Canada was defeated in the last minute of extra time and will now be schedule to face France in the bronze-medal match of the Women’s Olympic Football Tournament.

“They’ve come to see the flag rise,” said Canadian head coach John Herdman. “That’s the job. They came here for that and the job is not finished. They’ll be disappointed tonight because it won’t be gold or silver, but we’ll take a medal from this tournament.”

Captain Christine Sinclair scored a monumental hat-trick to give Canada the lead on three seperate occasions, but all three times, the Americans battled back to force the match to extra time.

The neutral crowd at Old Trafford in Manchetser, ENG were gripped by a remarkably fascinating contest, but unfortunately for Herdman’s Canadian side – it was a match that slipped away cruelly in the final 30 seconds of a marathon battle.

Fans can follow Canada’s progress at the London 2012 Women’s Olympic Football Tournament at CanadaSoccer.com; on Twitter @CanadaSoccerEN; at Facebook.com/CanadaSoccer and via CanadaSoccerTV.