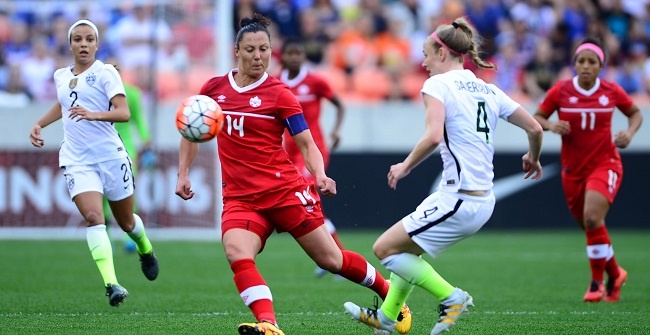 Canada takes silver, looks forward to Road to Rio after qualifying for Olympics

Canada takes silver, looks forward to Road to Rio after qualifying for Olympics

Canada’s Women’s National Team have achieved what they set out to do at the CONCACAF Women’s Olympic Qualifying Championship earning a spot at this summer’s Olympic Games.

Canada will have the chance to defend their Olympic bronze medal this summer after they earned their third-straight qualification through a 3:1 win over Costa Rica on Friday, February 19th.

In the final match of the tournament, Canada faced rivals USA for little more than bragging rights, given both teams secured their spots in Rio earlier in the tournament. But like any match between our two nations, the stakes were high for both teams as they sought to claim supremacy in the region. Canada finally finished in second place after an 0:2 loss to hosts USA.

Canada kept the reigning world champions at bay for just over 50 minutes, but then Lindsey Horan and Tobin Heath scored just eight minutes apart in the 53rd and 61st minutes.

“We came here to win the CONCACAF Final, so of course it’s disappointing,” said Canada’s centre back Shelina Zadorsky. “We are going to learn from it. It’s a good experience playing the world’s number-one team, so we are going to move up from here.”

Up next for Canada’ Women’s National Team is the 2016 Algarve Cup in Portugal. Drawn into Group A, Canada will face Denmark on Wednesday 2 March, Belgium on Friday 4 March, and Iceland on Monday 7 March. The final match will take place on Wednesday 9 March 2016.