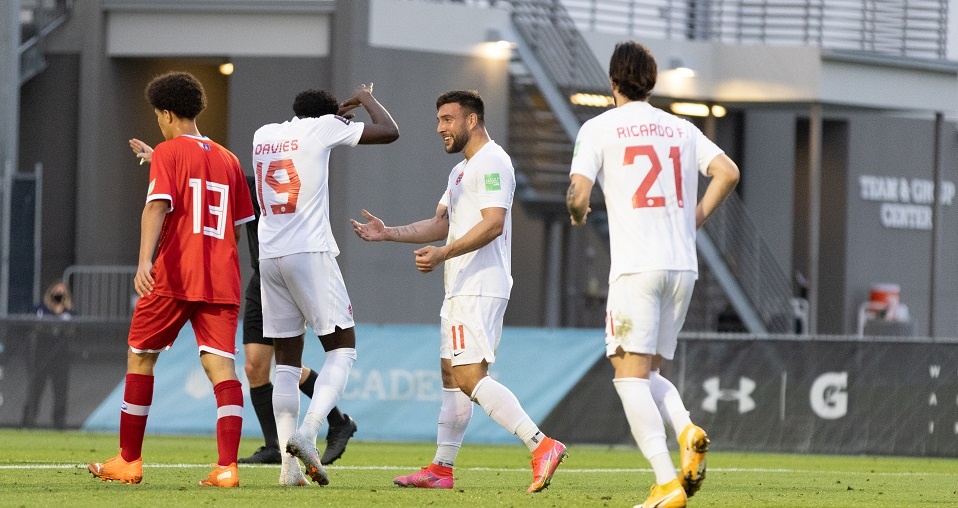 Canada Soccer’s Men’s National Team completed the first challenge in its FIFA World Cup Qatar 2022™ Qualifiers journey after an 11:0 win over Cayman Islands. The Monday night win gave Canada six points across two matches, coupled with a Thursday 5:1 win over Bermuda to put Canada in first place in their group. The strong performances came as the full Canadian squad came together for the first time in over 16-months to pick-up the momentum that had been building behind the program.

It was a night of firsts for Canada as Frank Sturing, David Wotherspoon, Mark-Anthony Kaye, and Alistair Johnston all notched their first international goals while Sturing and Ricardo Ferreira made their Canadian debuts. The Canadian squad also set several Men’s National Team records, including most goals in a match (11), largest margin of victory (11), and most goals across a two-match window (16). Of importance, goals difference would serve as a tie-breaker in case two nations were tied on points at the end of the First Round.

On a night where it was a true group effort, Canada’s 11 goals were scored by seven different players, with Cyle Larin, Lucas Cavallini and Alphonso Davies joining the group of players scoring for the first time. Cavallini, who became the first Men’s National Team player with two hat tricks in his career, moved into seventh place on the all-time list with 14 career goals.

“You have to start with what is in front of you and then it’s down to the players, their mentality and to go about their business to be professional,” said John Herdman, Canada Soccer’s Men’s National Team Head Coach. “We had to be sure after we thought Suriname slipped up a little bit with their result against Cayman Islands, so created a +6 goals difference gives us more control going into the June matches.”

The match, originally scheduled to be played a day earlier on 28 March, had to be delayed in the absence of appropriate COVID-19 test results for the Cayman Islands. Once the COVID-19 protocols were confirmed, the match was able to proceed.

With wins in its opening two matches in Group B over Bermuda and Cayman Islands, Canada will next gather as a group in the June FIFA window where it is scheduled to face Aruba on 5 June and host Suriname on 8 June to wrap up group play. From the First Round of FIFA World Cup Qatar 2022™ Qualifiers, the Group B winner will face the Group E winner in a Second Round, head-to-head series on 12 and 15 June 2021. The winner from that Second Round then advances to the Concacaf Final Round of eight nations scheduled to begin in the Fall of 2021.

“We’ve created something here, a brotherhood with a clear tactical identity,” said Herdman. “They care about each other and that’s the first thing. They care about taking this team to the FIFA World Cup and you saw it here tonight. They’re putting their bodies on the line and they’re not pulling out of tackles. They committed to a ruthless tempo from the first to the last whistle.”

CANADA WIN
Canada opened the scoring in the 5th minute as Sturing capitalized on a scramble in the Cayman box following a short corner set play from the Canadians. Sturing repeated his teammate Theo Corbeanu’s feat from Canada’s earlier match against Bermuda on 25 March of scoring within just minutes of making his Canadian debut.

Cyle Larin doubled Canada’s advantage in the 13th minute as Corbeanu played a long diagonal ball across the Cayman Islands box which Wotherspoon headed back across goal to an unmarked Larin who no mistake with a low drive that caromed in off the post.

Canada stretched the lead to four as Alphonso Davies converted a penalty he earned himself, slaloming through the Cayman defence before being cut down from behind. Davies made no mistake sending Holness the wrong.

Canada’s fifth came in the 32nd minute as Wotherspoon ran free down the Canada right wing, beat a defender, and crossed to the near post where Kaye arrived with pace to deftly redirect the low cross through Holness.

Alistair Johnston got his name on the score sheet in the 44th minute with a curling left footed strike when well positioned in the Cayman Islands penalty area as Canada put the finishing touches on a dominant first half.

Kaye scored Canada’s seventh of the match and first of the second half in the 63rd minute following some nice interplay down the left wing between Davies and second half substitute Sam Adekugbe resulted in the ball being squared to Kaye near the penalty spot and he quickly dispatched the ball into the lower right corner of the goal.

With the offense back in swing, second half substitute Lucas Cavallini wasted little time making an impact off the bench for Canada, rising to place a firm header into the Cayman goal.

Davies scored his second of the match following-up on a Kaye penalty that drew a double-save from Holness, directing the rebound past the outstretched keeper.

Junior Hoillet whipped in an inch-perfect cross which Cavallini dove to head into the Cayman goal, and then just moments later completed an impressive second half hat trick.

Canada’s starting XI featured Max Crépeau in goal, Alphonso Davies at left back, Frank Sturing and Ricardo Ferreira at centre back, Alistair Johnston at right back, and Sam Piette, Mark-Anthony Kaye, Theo Corbeanu, Liam Millar, David Wotherspoon, and Cyle Larin from the midfield up through to the attack. In the second half, coach John Herdman replaced Larin with Lucas Cavallini (60), Corbeanu with Junior Hoillet (60), Millar with Samuel Adekugbe (60), Piette with Stephen Eustaquio (68), Johnston with Richie Laryea (68).