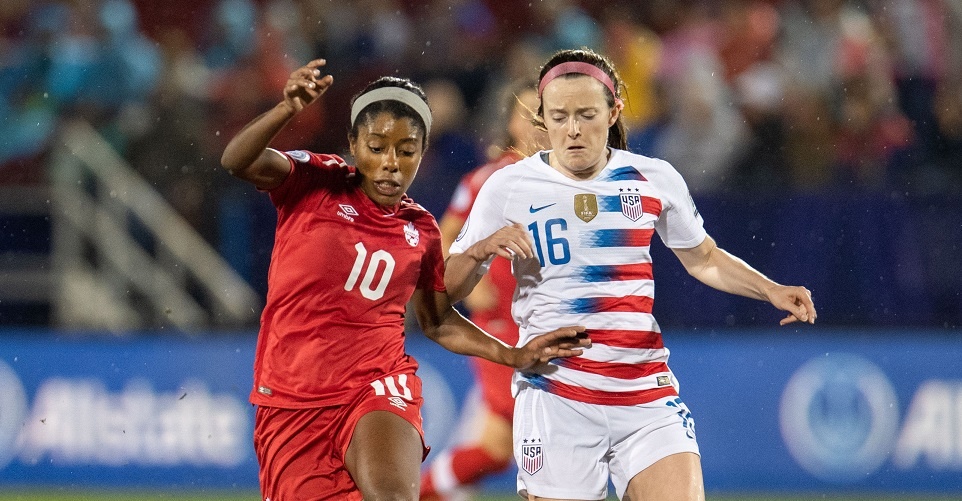 Canada has earned second place at the 2018 Concacaf Women’s Championship falling 0:2 to the United States in the Final. Canada secured their place in the […]

Canada has earned second place at the 2018 Concacaf Women’s Championship falling 0:2 to the United States in the Final. Canada secured their place in the FIFA Women’s World Cup™ France 2019 with their 7-0 victory over Panama in the Semi-Final after a strong tournament run with 24 goals and only three conceded throughout the tournament.

The United States scored early in the 2’ minute after a clearance attempt fell to Rose Lavelle. Alex Morgan scored her seventh goal of the tournament to put the USA up 2-0 in the 88’ after a late corner kick earning Morgan the tournament’s Golden Boot and securing the victory for the US.

“I was definitely pleased with the majority of our play but letting in a goal that early was definitely not part of the plan and I think that the team bounced back well,” said Kenneth Heiner-Møller, Canada Soccer Women’s National Team Head Coach.  “I’m confident looking forward as I think we created chances and that in those opportunities we just need to make the final pass and we will be rewarded.  We definitely put in a solid performance.”

Canada had two chances to draw even in the match with Captain Christine Sinclair coming close late in the first half. Kadeisha Buchanan had the best opportunity on a set piece in the second half with American goalkeeper Alyssa Naeher making a diving stop off Buchanan’s header to keep it 1:0.

“We grew throughout the tournament and our number one objective coming in was to qualify for the FIFA Women’s World Cup France 2019™, so we did that,” said Ashley Lawrence. “I think we’ve learned so much, we’re going to take those learnings going into the World Cup™ next year.”

Heading into the Final, Adriana Leon and the USA’s Alex Morgan were tied for the Golden Boot award with six goals apiece. Jordyn Huitema, Christine Sinclair and the USA’s Tobin Heath were tied at four each.

Canada, the USA and Jamaica have all qualified for the FIFA Women’s World Cup France 2019™ with  Jamaica earning the third spot by defeating Panama on penalties in the third place match.  The Official Draw for France 2019 will take place in Paris on 8 December 2018.

With ten months to go until the next edition of the FIFA Women’s World Cup™ since Canada lasted hosted in 2015, the team will use the experience of the Concacaf Women’s Championship to assess its tournament readiness, especially its strength at adapting to quick turn around times between matches, and will be further developing strategies leading in to 2019.

Fans of the women’s game can also find additional information and stories on FIFA’s Women’s World Cup™ channels on Twitter and Facebook.
Canada Soccer’s Women’s National Team
Canada are two-time Olympic bronze medal winners (2012 and 2016) and two-time CONCACAF champions (1998 and 2010). In all, Canada will have participated in seven consecutive editions of the FIFA Women’s World Cup (1995 to 2019) and three consecutive editions of the Women’s Olympic Football Tournament (2008 to 2016). At Rio 2016, Canada Soccer’s Women’s National Team were the first Canadian Olympic team to win back-to-back medals at a summer Olympic Games in more than a century and the only FIFA Member Association to repeat on the podium.