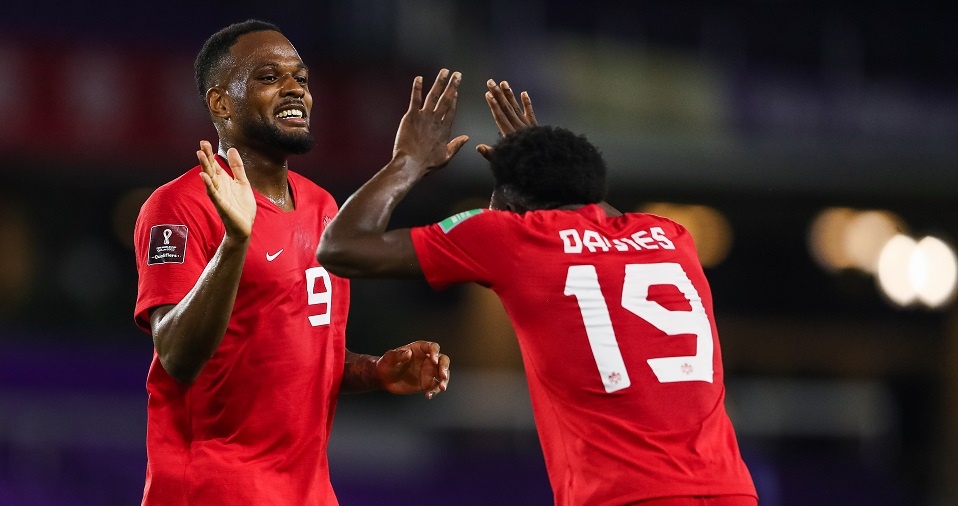 Canada’s Men’s National Team took a positive first step on the road to Qatar 2022 with an energetic performance winning 5:1 over Bermuda at Exploria Stadium in Orlando, Florida, USA. Forward Cyle Larin led the way for Canada with a hat trick while Richie Laryea and Theo Corbeanu both scored their first goals as Canada came roaring back from a 16-month layoff to get off to a strong start in the First Round of Concacaf’s qualifying pathway.

For goalscorers Larin and Ritchie, the performance marked a triumphant return to Exploria Stadium for the former Orlando City SC men, while Corbeanu scored just minutes into his Canada debut, as Canada’s explosive attacking football repeatedly opened up the Bermuda defence.

“We said it was about being dominant and taking control, but we also knew there would be frustrating periods, that this team would take some time to find some rhythm, and I’m really proud of them, because it’s not easy,” said John Herdman, Canada Soccer’s Men’s National Team Head Coach. “These guys have been away for a long time and when they found their rhythm in those patches, it just shows what this team can do and also how exciting the talent is coming through.”

Having secured the opening three points in Group B play, Canada will now look forward to facing Cayman Islands on Sunday 28 March (16.00 ET / 13.00 PT) in the second of two FIFA World Cup Qatar 2022™ Qualifiers to be played in the March FIFA Window. The Canada-Cayman Islands match will be broadcast live on OneSoccer with extended coverage throughout the tournament on Canada Soccer’s digital channels including YouTube, Facebook, Instagram and Twitter featuring the social media hashtags #CANMNT and #WCQ.

Canada opened the scoring in the 19th minute through a superb Larin flicked header off an Alphonso Davies driven set-piece cross. Junior Hoillet earned the free kick after being pulled down trying to cut in from the right which set the table for Davies to hit an in-swinging left-footed cross that Larin rose to flick past Bermudan goalkeeper Dale Eve to nestle in the far corner of the goal.

It was the same duo of Larin and Davies that combined to carve open Bermuda’s defence as Canada doubled its advantage in the 27th minute. Davies broke away down the left wing following a great through ball before centering to Larin who was driving into the box late. Larin took a touch around his defender and calmly slotted into the bottom left corner of the goal.

Six minutes later (33′) Canada came close to extending its advantage as Davies, who was frequently escaping behind the Bermudan defence from his left wing position, crossed for Lucas Cavallini whose close-range shot caromed back off the cross-bar. Canada finished a dominate first half performance by creating several more quality chances without being able to break through.

Fullback Laryea scored Canada’s third goal eight minutes into the second half (53’) as he raced away from the Bermudan defence, held off a defender on his back and kept his composure to slide the ball home past the diving Eve.

Bermuda pulled one back against the run of play in the 63rd minute as Kane Critchlow reacted quickest to a loose ball in the Canadian box to slot home at the near post past goalkeeper Milan Borjan.

Canada’s Larin completed his hat trick performance in the 68th minute driving his shot home from close range as Davies cut it back across the box from the left.

Corbeanu completed the scoring for Canada in the 81’, needing just three minutes into his Canadian debut to make an impact turning Liam Millar’s low cross into the open Bermuda goal as the substitutes combined to good effect.

“It feels nice to be back on the field, having the players we have, it’s fun to play with them, it’s exciting,” said Cyle Larin. “We haven’t played in a while, but you see when we get together, we are ready, ready to fight for each other, and we know our goal. Our goal is to take each game step by step, and then to make the FIFA World Cup, and I believe we can do that.”

Canada’s starting XI featured Milan Borjan in goal, Ritchie Laryea at right back, Steven Vitoria and Kamal Miller at centre back, Samuel Adekugbe at left back, and Atiba Hutchinson, Stephen Eustáquio, Junior Hoilett, Alphonso Davies, Cyle Larin, and Lucas Cavallini from the midfield up through to the attack. In the second half, coach John Herdman replaced Laryea with Alistair Johnston (69’’), Cavallini with Liam Miller (69’’), Eustáquio with Samuel Piette (78’), Hoilett with Theo Corbeanu (78’), and Adekugbe with David Wotherspoon (78’).