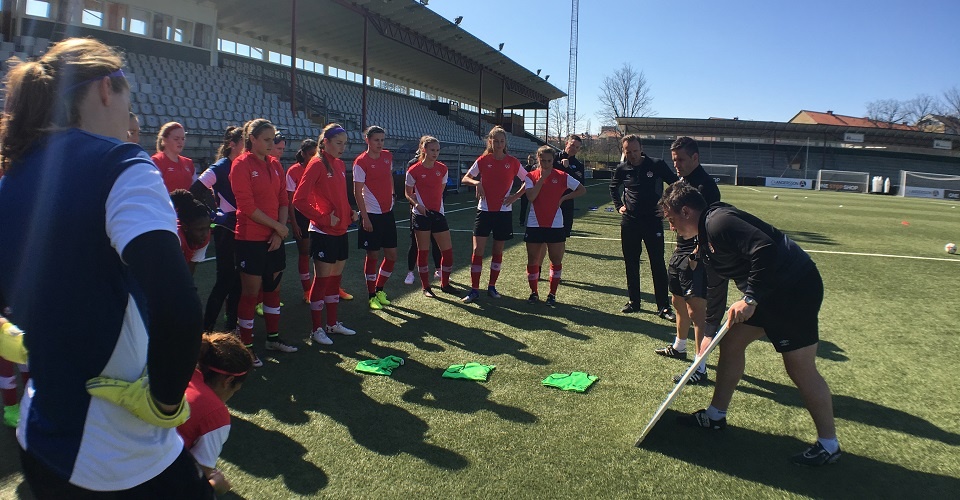 Canada Soccer’s Women’s National Team are gearing up for its first of two international friendlies in Europe, starting with Sweden on 6 April 2017 in Trelleborg, Sweden. Canada will play its second match against Germany on 9 April in Erfurt, Germany.
“Sweden are preparing for a major tournament, the UEFA Women’s Championships, and they are a competitive team. They came away from the Rio Olympics with a Silver Medal, they have several world-class players, so for us in this stage of our four-year cycle, this match will be a great test,” said Head Coach John Herdman from Malmö, Sweden, where the team is training ahead of the match.
The upcoming match against Sweden will be Canada’s first match since returning from the 2017 Algarve Cup in March. Canada placed second at the recent 12-team tournament, falling to Spain in the final match.
“We came out of the Algarve Cup a little disappointed not to have won the final, so there is a little something we want to put to bed from that,” said Herdman. “Sweden will be the team that we get the chance to make that happen.”
Looking ahead to the match against Sweden, Herdman is drawing out the best from each of the 22 players in camp, including giving greater responsibility to the young players who are becoming the backbone of a squad that has an average age of 23 years old, and includes six teenagers.
“Some of these young players, who have amassed fifty caps at a very young age, are starting to step into leadership roles and starting to bring some of their professional experience, people like Lawrence and Buchanan who are playing at the highest club level in the world – and we are starting to demand that from them,” said Herdman.
For Ashley Lawrence, who plays for Paris Saint Germain in the Division 1 Féminine league in France, striking a balance is important – something she sees as coming together for Canada.
“There has definitely been a transition over the past few years. A lot of the players, like myself, Kadeisha (Buchanan) and Jessie (Fleming), we’ve gained experience over the last few years and it’s been great to see the progress of this team,” Lawrence said. “We still have a great balance of veterans and the youth that is coming in and bringing their own flare and versatility. We are in a good space where we have connected on the field, and have grown together as a team. Now, coming into these matches against Sweden and Germany – two tier one opponents – it’s going to be a huge test.”
“The players are excited, it’s a young group, and I think everyone is just looking forward to get out and play Sweden in a home match, that we know is going to be tough,” added Herdman. “These are two big matches for us. You don’t often get the opportunity to play both the Olympic Gold and Silver Medalist in back-to-back matches, but this is what we are looking for to test our current group and to identify our gaps in the build up to the FIFA Women’s World Cup France 2019”.
Canada Soccer’s Women’s National Team have recent history playing Germany, including two games at last summer’s Olympic Games, but it hasn’t played Sweden since a two-match series in 2014 in Los Angeles that resulted in a 1-0 win for Canada, followed by a 1-1 draw days later.
Both Germany and Sweden recently rose in the FIFA rankings, with Germany overcoming the USA to take the coveted number one spot in women’s football. Sweden is tied for sixth with Japan, while Canada sits in the fifth-place position.