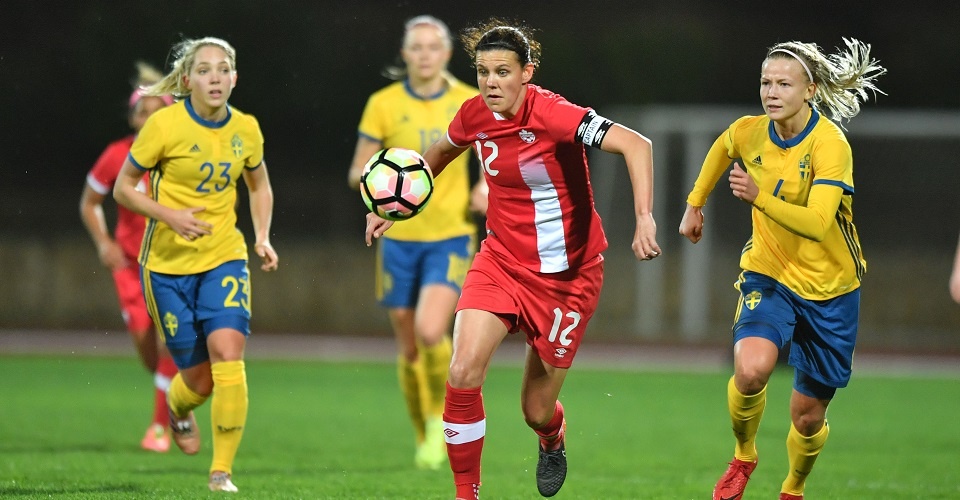 Canada Soccer’s Women’s National Team fell 3:1 in its opening match of the 2018 Algarve Cup.  Playing in its first match since November’s home and away […]

Canada Soccer’s Women’s National Team fell 3:1 in its opening match of the 2018 Algarve Cup.  Playing in its first match since November’s home and away international friendly matches against USA and Norway, Canada controlled large parts of the game and demonstrated creativity throughout, but Sweden succeeded in capitalising on defensive errors to defeat the Canadian side.
The score line remained 0-0 until the dwindling minutes of the first half when Sweden jumped on a loose ball in a scramble in front of Canada’s net and put the ball past a sprawling Stephanie Labbé.
Canada came out after half-time on a mission, scoring in the first minute of play. Allysha Chapman sent a ball down the pitch for Nichelle Prince, who beat her mark, shot on net and crossed the rebound for the equaliser. The ball was initially awarded to Prince, but it was Janine Beckie who knocked it in.
Sweden responded in the 52nd minute, with a shot from the wing to make it 2-1.  The play continued fairly evenly back and forth throughout the second half, with Canada connecting up the midfield and creating several good chances, until Sweden picked off an errant Canadian pass in front of the net and put the ball past Labbé in the 87th minute to secure the win.
“Despite the score line, we saw a lot of positives in this match,” said Kenneth Heiner-Møller after this first match as Head Coach for Canada Soccer’s Women’s National Team. “There are certainly things we will take away and work on before we face Russia, but overall the players put a lot out there tonight and we are proud of them. We’ve asked this team to be the most creative group in this tournament and to continue building on the efforts that saw Canada draw the USA in November – a tactically creative, enjoyable form of soccer – and they did that tonight.”

The other match up in Group B resulted in a 3:1 win for Korea Republic over Russia.  All 12 teams competed on the opening day of the 2018 Algarve Cup, with hosts Portugal bested China 2:1, the Netherlands beat Japan 6:2, Denmark drew Iceland 0:0, and Australia beat Norway 4:3.
The match against Sweden saw the return of veteran midfielder Diana Matheson who has been sidelined since ACL surgery in 2016.  Her last match for Canada was the Bronze Medal win against Brazil at the Rio 2016 Olympic Games.
Canada’s second match of the 2018 Algarve Cup, the prestigious annual international women’s soccer tournament in Portugal, is against Russia on 2 March with a 19.00 local kick off at Estádio Algarve (14.00 ET / 10.00 PT). The two sides met in the 2017 edition of the Algarve Cup, with Christine Sinclair supplying the winning goal of a 2:1 victory. All time, Canada have posted a record of three wins and one loss in four matches against Russia since 1999.

Canada’s final group stage will be against Korea Republic on 5 March with a 15.00 local kick off at Estádio Municipal de Lagos (10.00 ET / 07.00 PT). To date, Canada have posted a record of six wins and one loss in seven matches against Korea Republic, but the last two matches in 2015 were both one-goal victories.

In 2017, Korea Republic posted an international record of five wins, two draws, and six losses in 13 matches. Korea Republic are gearing up for their AFC Women’s Asian Cup in Jordan in the month of April.