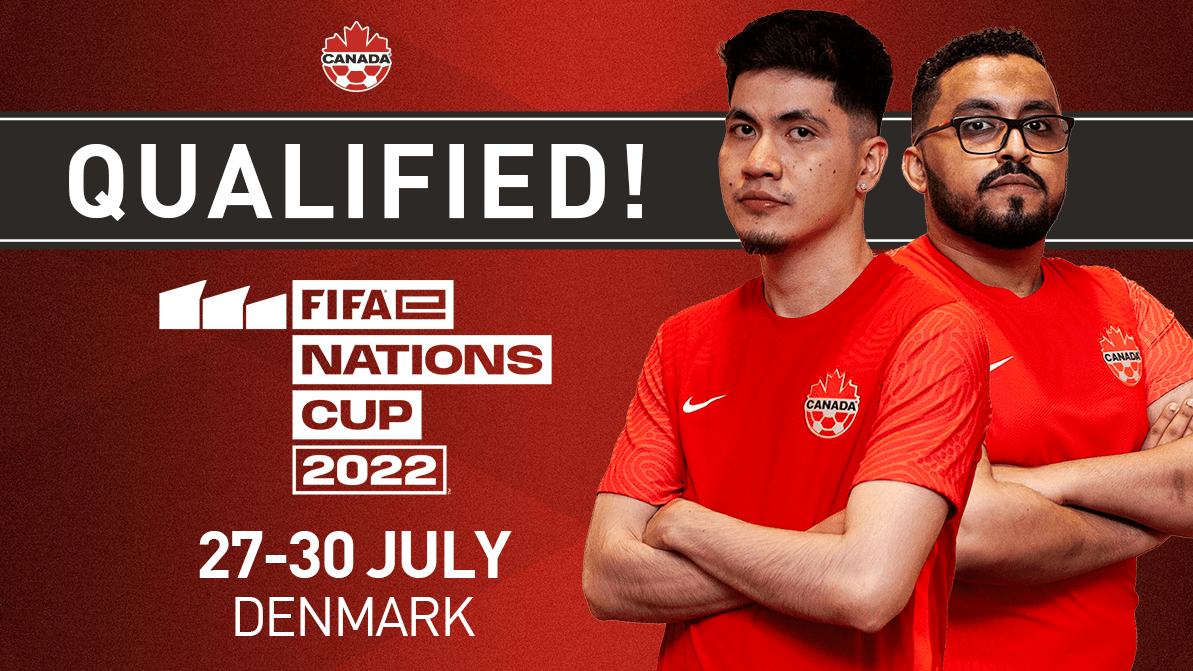 Canada Soccer’s eNational Team wrapped up an intense final day with a win over Costa Rica in a two-leg series to join Mexico as North and Central America’s entrants to the FIFAe Nations Cup 2022 in Denmark. The competition spans 27-30 July and will see 24 top nations compete in the largest FIFAe event of the year.

Canada started off strong, finishing 2nd after two days of Group Stage matches in which each team played eachother twice, for a total of 10 matches. Canada Soccer’s eNational Team members Goalmachine and AJ proved that they were up to the challenge, posting strong results throughout the weekend.

“It means everything to me, I was a student and a refugee and I hope to give back to this country. I know it is eSports, but it is growing. Canada is everything to me, and we’re going to rock and roll in Denmark” said eNational Team player AJ

Day 1 kicked off with Canada taking on the USA in the opening match, and after a hard-fought match, Canada came up with a loss – finishing 3:1 in favour of the USA. Canada took on Honduras next and after a strong first half came away with a close win, finishing 2:1. Canada came out with a draw against Puerto Rico after scoring two goals in the first half and finishing the game 2:2. Canada faced off against Mexico next and scored quickly in the first half and another near the end of the match to come away with the win. The score was 3:0. Canada drew against Costa Rica to close out day 1 of the group stage. Match ended 0:0.

Day 2 opened with a tightly contest rematch with the USA. Canada was able to level the scoring to end the match as a draw. The match ended at 2:2. Canada scored early against Honduras and made it 2:0 in the first half to secure the 4:1 victory. Canada defeated Puerto Rico 2:1 and clinched entry to the knockout stages. Canada conceded a goal early to Mexico in the 10’ and lost the match 3:0. Canada faced off against Costa Rica and easily beat them 4:1 to close out the group stages in second place.

On the final day, Canada opened with the semi-finals against Costa Rica for Leg 1 and had a tightly contested first half. Canada conceded a goal early in the second half but came back and scored a last-second equalizer in the 90’. To start off the Second Leg Canada fired early in the 7’ to make the score 1:0 (2:1 aggregate). Canada played a dominant second half and won the second leg 3:1 (5:2 aggregate) to advance to the winner’s final. In Leg 1 of the winner’s final Canada took on Mexico and conceded in the 20’ to the Mexicans but Canada fired back to equalize the first half 1:1. Canada lost Leg 1 3:2. In the Second Leg Canada scored right before the half to draw the match 1:0 (3:3 aggregate). Mexico scored early in the second half, but Canada responded back with a goal of their own to make it 2:1 (4:4 aggregate) to end the second half. Canada lost to Mexico in a penalty shootout. Canada faced off against Costa Rica for the second time today in the Loser’s Final. Canada scored first in the First Leg in the 30’ to make it 1:0 for the first half. Canada’s AJ scored a goal from distance with a finesse shot in the 81’ to win the First Leg against Costa Rica. Canada conceded first to Costa Rica in the 24’ in the first half of the second leg. Canada scored right before the end of the game in the 88’ to equalize the second leg 1:1 and win on aggregate to advance to FIFAe Nations Cup 2022 next month in Denmark.