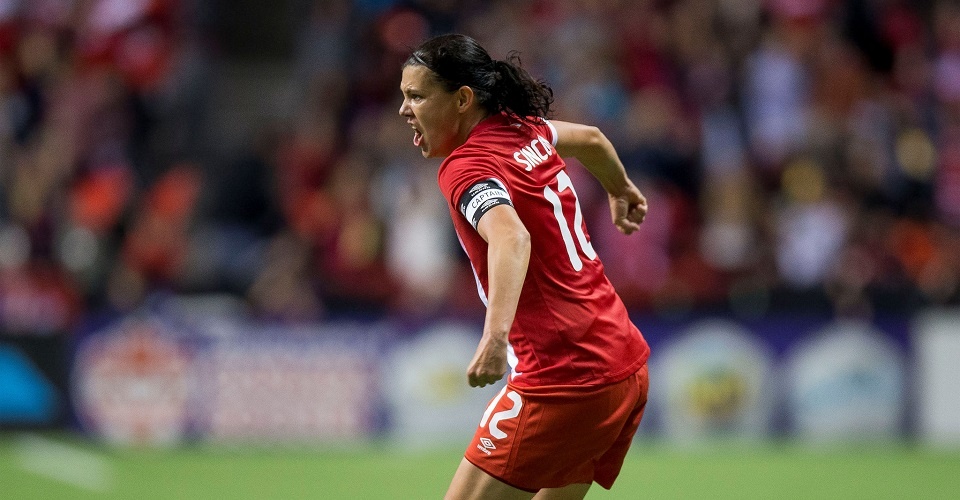 Canada Soccer’s Women’s National Team came back from a 2-0 deficit in the first half to defeat Norway 3-2 in its final match of 2017. In a dazzling display, Canada scored three goals in under 15 minutes to turn the match on its head in the early minutes of the second half, and posted its first ever win against Norway.

Norway opened strong against Canada, scoring in the 18th minute off a corner (Ina Gausdal), and again in the 37th minute with a strong right-footed strike from just inside the box (Caroline Graham Hansen). Canada regrouped and found its rhythm just before going into halftime, having created a number of chances from within the midfield including a good run from fullback Lindsay Agnew who got the ball in front of Norway’s net forcing the keeper to make a leaping save.
Canada’s momentum continued into the second half and changed the face of the game. In just under 15 minutes, Canada came back from a 2-0 deficit to lead 3-2 with goals by Christine Sinclair, Janine Beckie and Adriana Leon. Sinclair put Canada on the scoreboard in the 52nd minute when she capitalized on a Norway mistake and slipped the ball past the scrambling Norway keeper for her 169th international goal which puts her just 16 goals shy from becoming FIFA’s top women’s goal scorer of all time. Beckie tied the match up in the 64th minute, burying the ball from the top of the box, and only two minutes later substitute Leon sliced through the defence to tap in Maegan Kelly’s pass, putting Canada up 3-2.
“That was our first win against Norway in Canada’s history, so a great way to end the year,”’ said Head Coach John Herdman after the match. “I think the main thing tonight was seeing what level of performance this team can push to when challenged. At about the 20 minute mark we started finding a rhythm, we shifted some things tactically and it was about getting the midfielders on the ball. I felt we were way too forceful from our back four, so once we got Schmidt and Lawrence on the ball the momentum changed. We were a lot more aggressive in the second half, playing right up against them, and forced them into a lot of errors, but the credit is to this group: they said they were going to do something today and they absolutely committed at half time and they did what they said they would do.”
Canada started Stephanie Labbe in net; Lindsay Agnew, Kadeisha Buchanan, Shelina Zadorsky and Allysha Chapman on the back line; Ashley Lawrence, Desiree Scott and Sophie Schmidt at midfield; and Janine Beckie, Christine Sinclair, and Nichelle Prince up front.
Canada subs included Adriana Leon for Lindsay Agnew (58’), Maegan Kelly for Nichelle Prince (62’), and Jordyn Huitema for Christine Sinclair (84’).
Currently ranked fifth in the FIFA World rankings, Canada has posted solid results against tough teams for a 7-2-3 record in 2017 including a draw and a loss to world’s top ranked USA earlier this month, wins against Norway, Sweden, Russia, Denmark, Mexico and two against Costa Rica, and a second place finish at the 2017 Algarve Cup.
“It’s been a good year,” reflected Herdman on 2017. “We said goodbye to some veteran players against Mexico in February with a great crowd; we got to the Algarve Cup final for the second year in a row; we beat the Olympic silver medalists Sweden in Sweden; we were a narrow loss to Germany; we drew with the USA and that was a game that we felt we should have won, and then beating Norway here for the first time in our history – it’s been a good year. We are two years out from the FIFA Women’s World Cup and there is still a long way to go.”
Looking ahead to 2018, and the CONCACAF Women’s Championship to qualify for the FIFA Women’s World Cup France 2019, Herdman is looking to work on further building the on-field connection between Canada’s players.
“For 2018, we are hoping we can get our team together consistently,” he said. “I think our biggest issue in 2017 was having to bring together different groups of players due to conflicting international commitments, so some players haven’t been with the team for six months and that showed in the first 25 minutes of this match against Norway, there was a little bit of disconnection, and you could feel the rhythm of the game wasn’t there. Building those connections between players is what produces the real quality I know we can see from this team.”