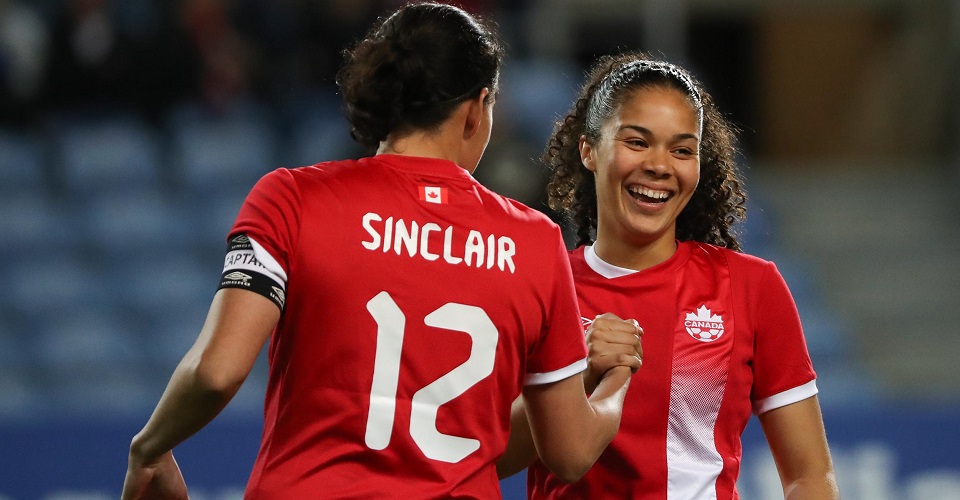 Canada Soccer’s Women’s National Team will play Spain in the championship match of the Algarve Cup 2017 after a 0-0 draw against Portugal on 6 March 2017 secured Canada the top spot in Group A.

MATCH CENTER: CANADA 0:0 PORTUGAL
The scoreless draw against home side Portugal was not without its action. After a difficult first half, Canada found its rhythm in the second and forced Portugal into it’s end for much of the 45 minutes.

“It was a scrappy first half, but Canada found our gear in the second,” said Head Coach John Herdman. “We just had to figure out their diamond formation which was a little bit different for us and caused us a few problems at the start, but once we got our rhythm we had some great opportunities.”
Canada placed several shots on net forcing Portugal’s Goalkeeper Patricia Morais to make some outstanding saves. Included was a Kadeisha Buchanan header off a free kick in the 70th minute that required outstretched fingers to tip it over the bar, followed by a diving save on a perfectly placed Christine Sinclair shot in the 72nd minute, followed two minutes later by two shots from Deanne Rose and Sinclair in quick succession.
“We had a few good opportunities to go and win the game, but their keeper – to be fair – was player of the match tonight. She had a great performance,” said Head Coach John Herdman. “It was a frustrating night. I know the team was really frustrated. They should have put Portugal to bed in the second half, but we were looking towards the final as well and knew the draw would see us through, and that’s where we are heading again.”
Canada won the 2016 edition of the Algarve Cup, its first appearance at the tournament since 2003, with a 2:1 victory over Brazil in the final match of the women’s international competition. Canada reached the final after winning Group A with six points. Canada has now improved on it’s group stage record from the 2016 edition, earning seven points over three games, defeating Denmark and Russia before tying the hosts in the final group stage match.
Lindsay Agnew earned her first cap for Canada after subbing in for Marie Levasseur in the 69th minute, officially graduating from the EXCEL program to the Women’s National Team, and giving additional international experience to Canada’s squad.

Recent EXCEL program call ups Lindsay Agnew (21) and Alex Lamontagne (20) made their first appearances for Canada in the Group Stage of the 2017 Algarve Cup, alongside returning EXCEL players Marie Levasseur (19) and Sarah Stratigakis (17).  By instilling more youth in the squad, Herdman continues to build team depth to give Canada more opportunities to compete in fast-paced tournaments, like the Algarve Cup.  EXCEL calls ups Jordyn Huitema (15) and Hannah Taylor (17) have yet to see the pitch for Canada, but have been training with the team throughout the competition.