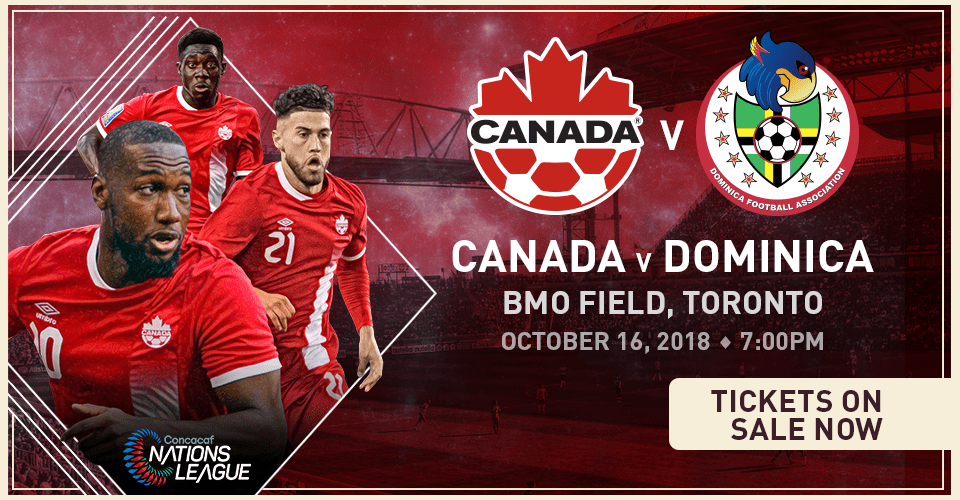 Tickets for the Canada v Dominica Concacaf Nations League Qualifying match in Toronto are on sale now. Tickets can be purchased via Ticketmaster.ca and by phone […]

Tickets for the Canada v Dominica Concacaf Nations League Qualifying match in Toronto are on sale now. Tickets can be purchased via Ticketmaster.ca and by phone at 1.855.985.5000.

Canada will begin the 2018-19 Concacaf Nations League Qualifying series on 9 September away against U.S. Virgin Islands. Following the home match in October, Canada will then face St. Kitts & Nevis away on 18 November and then French Guiana at home on 26 March for their last match in this round.

Ticket Information
Tickets to the Canada v Dominica match start as low as $20 (plus applicable fees) and are available via Ticketmaster.ca and by phone at 1.855.985.5000.

Group Ticket Discount Offer
Group discounts (10+ tickets) are available for this match, by organizing a group of 10 or more, fans are eligible to receive a discount of up to 30% off regular priced tickets. To submit a group ticket request, complete the group order form indicating the price point and quantity of tickets you are wishing to purchase here: Group Order Form. Ticket orders will be processed on a first come, first serve basis so organize your group, club, or team today.

Premium Seating
BMO Field’s Premium Seats offer fans an enhanced match day experience featuring access to the state-of-the-art West Club lounge, where complimentary food and non-alcoholic beverage hospitality will be offered, and some of the best views in the venue from larger, comfortable seats. Premium Seats can be purchased directly through Ticketmaster.ca.

‘Me+3’ Offer
A special ‘Me+3’ ticket offer is available for this match. By purchasing three tickets in Price Category 3, fans will receive the fourth one free. The ‘Me+3’ ticket packages can be purchased directly via Ticketmaster.ca at the beginning of public onsale on 25 July.

Canadian Supporters
Canadian Supporter Groups have been allocated dedicated seating in the South stand at BMO Field. Information about the Canadian supporter sections is available via the Voyageurs website Please note that persistent standing will be permitted in these sections.

Visiting Supporters
Visiting supporters will be allocated a number of dedicated sections. More information will be available shortly.

Concacaf Nations League Qualifying
In 2018, Canada will also participate in the new CONCACAF Nations League, the new national teams competition platform created to maximize the match dates presented with the FIFA international calendar. The League of Nations has been created to provide an avenue for more meaningful and quality international soccer matches while uniting the CONCACAF region through competition.